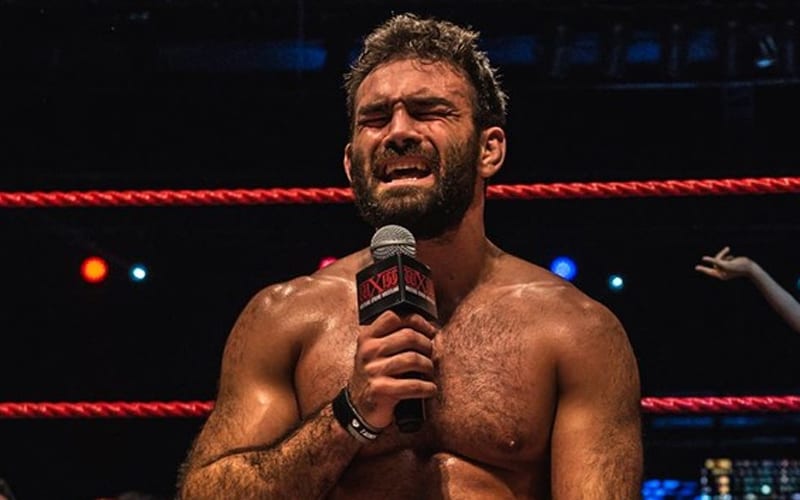 David Starr has been involved in a fair amount of controversy in the past. He has now spoken out about claims that he was sexually abusive in a previous relationship.

A woman named Tori claimed that David Starr has folders of dirt on people to keep them from coming forward about different things he has done. She then provided screenshots that she claims show Starr was sexually abusive.

She admitted to not having all of the screenshots of conversations because she was “trying to heal.” She alleged that he manipulated her into having a relationship while he was still with his now-ex as well. She captioned these shots and other visual evidence with the following tweets.

Just to be clear. I don’t want anything. You want to book him, book him. You like his wrestling, whatever.

This is for me because for years while I was trying to heal, he told everyone who would listen that I was a crazy liar. Every woman who’s dealt with David Starr is tired.

A lot of my screenshots from those times are gone cuz obviously I was trying to heal and I didn’t want to be brought back to it.
But I have some. I was manipulated into this relationship when he was still w his ex K and I was manipulated out of it. “I’m not letting you leave me”

David Starr then spoke out against these allegations. He stated that he has “acted like a child” in his personal relationship with women. He also admitted to lying and cheating in a repeating cycle of relationships. He is now going to a therapist and is trying to be a better version of himself.

“Over the course of my life I have grown & matured a tremendous amount, but when it comes to my personal relationships with women I have acted like a child.

With nearly every partner I’ve had, I have lied, cheated, lied about the cheating then repeated that cycle. When it comes to relationships with my partners, I am emotionally immature to say the least. This comes from a lack of self value. That lack of self value stems from a lifetime of parental issues amongst numerous other surrounding circumstances. This is no excuse for the lies, the cheating and attempts to manipulate my way out of the consequences but rather just to say that I’ve recognized where I’ve done wrong and why I continued those wrong & immature behaviors.

Since August 2019, I have been going to a therapist. It has helped me reach an understanding as to why I do these things to my partners and has helped me get to the root cause of my neediness, crave for external validation and my inability to be truly honest with my partners. Through therapy and other forms of self care, I am taking the steps so that I won’t put anyone through this again. That will only come through truly valuing myself internally, which I’m seeing now is a long and tough journey.

The existence of a mask has acted as a defense mechanism to not look introspectively. That lack of introspection is the reason why my behavior towards partners has continued. The strange dichotomy is that social media has also exposed me to ideas that have inspired personal growth in a myriad of other ways including my views on society, economics, politics and government. Regardless of that, my dependence on external validation has been detrimental to my own personal emotional development.

I’ve known that my actions would cause people around me pain, with my partners taking the brunt of the impact. I know those actions cause myself pain as well and creates unnecessary chaos in my life. I have been forced to come to these realizations. I am tired of being the way I am with my partners. There’s no other way around it other than to confront my issues head on and recognize that when it comes to relationships with my partners, I’ve been the bad guy. That doesn’t mean that my partners have been perfect or that I haven’t been on the receiving end of abuse. That doesn’t mean that my own lack of self value and my relationship with my parents haven’t subjected myself to attaching to other imperfect people. But in many ways I believe that my gaslighting behavior contributed to my partners’ trauma that caused lashing out. I have repeatedly apologized to my partners about hurting them and I sincerely meant those apologies. However, the apologies were never complete. The reason being was because of that lack of self analysis which has resulted in a repeating of the cycle.

By never taking the time to focus on me, I’ve acted like a teenage boy towards partners. Quite simply, I need to grow the f*** up.

I’m trying to do better and I don’t want to hurt anyone anymore.

I apologize to anyone who looks to me as a role model and anyone that I’ve disappointed.

Most importantly, I sincerely apologize to Jackie, Allison, Kali, Victoria, Bella and any other partners I’ve had for any and all torment I’ve put you through because of my own inability to mature and to love myself. You all deserved better than what I gave you.”

Tori fired back at Starr’s response. She obviously didn’t think it was adequate. She said he has never apologized, but instead, he “crawled into other wrestler’s DMs to muddy” her name.

You keep saying you have apologized but “I don’t remember doing that but I apologize” to the rape is not an apology.
You have never apologized, you’ve crawled into other wrestlers dms to muddy my name. You are full of shit and this notes app revelation doesn’t do anything for me

This is a very tricky situation, especially when heavy allegations are thrown around like this. Starr’s response seemed to admit that he wasn’t the best guy. in the past That time when he wasn’t as noble falls within the timeline of the events that Tori described.