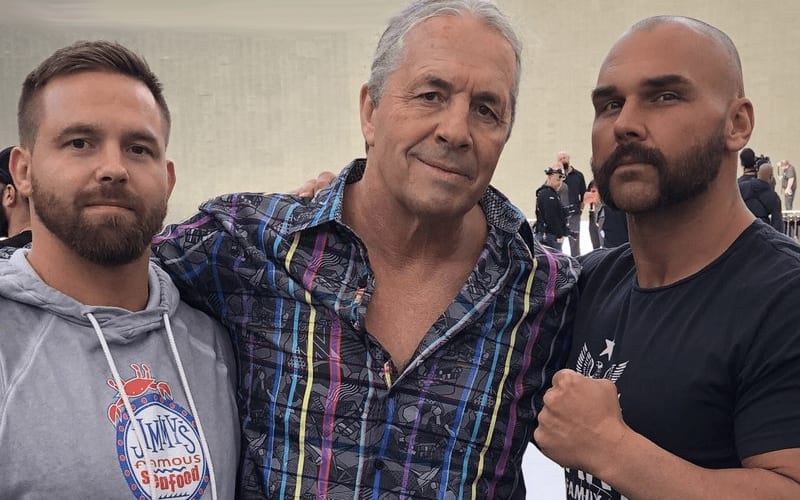 Bret Hart was giving an induction speech for the Hart Foundation during the 2019 WWE Hall Of Fame. Then someone jumped the barricade and tacked the Hitman.

Chaos erupted in the ring and many people flooded in to break things up. On the way out, Dash Wilder hit this attacker with a stuff uppercut. As he spoke about this moment with Jim Cornette in retrospect, it was a crazy experience.

“The dude’s hand they’re not restrained. He’s still threatening everybody like ‘let me go let me go’ I won’t go into too much detail. But….his hands were free. He’s still making threats, he’s obviously not mentally stable at this point in time. We just did what we had to do to neutralize the situation.”

“He stated that he wasn’t going to let anybody take the risk of thinking the guy was bluffing that he’s not gonna hurt anybody. He noted that the fan had already shown that he’s gonna he’s going to attack people and do some stupid things. “None of us are willing to take that risk of saying we hope he’s lying.”

Later on, Cash Wheeler had a conversation with Vince McMahon about it. The Chairman needed to know what happened. Luckily, there was plenty of proof that Wheeler’s uppercut was more than justified.

“I did have a meeting with Vince McMahon and I did have to show him the video from multiple angles so he could see that the guy wasn’t restrained. There were no cuffs, no cops, no security, just the boys, and a mentally unstable guy whose hands are not being restrained at all. As soon as he saw the video and I told him kind of like what the guy had been saying, everything changed.”

“He wasn’t mad to begin with, he was just worried. Once he saw the video, once he saw the guy was not restrained, he was still a threat and that was the case, he was like, ‘that’s completely justified, that’s self-defense, you guys had to do what you had to do in a blink of an eye to make sure no one else got hurt.”

Bret Hart’s attacker really shouldn’t have jumped in the ring in the first place. Considering the fact that the building was full of trained fighters and he was attacking a beloved legend, the guy did have it coming to him. He’s lucky that Cash Wheeler is the only one who too a cheap shot.