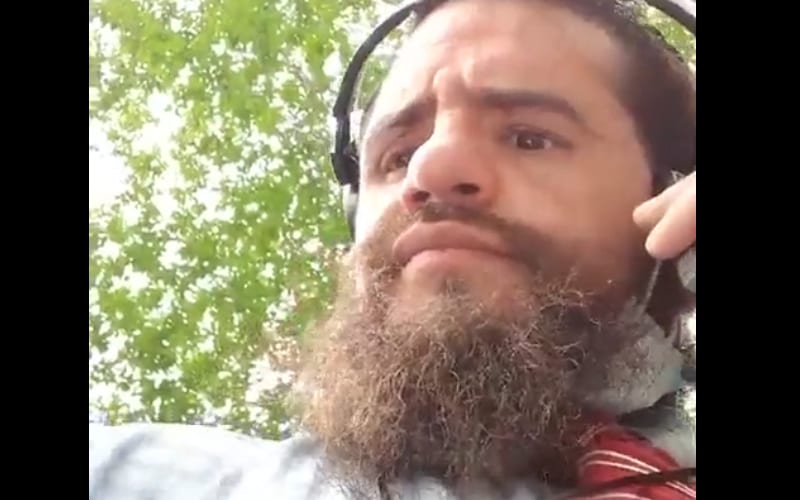 Armando Alejandro Montalvo was shot outside the WWE Performance Center in 2015 by Orange County Police. He was acting erratically after smearing feces mixed with milk all over the building. At the time they said he had a knife, which he denies. WWE didn’t want him coming back either way.

Montalvo claims to live on the same street as Full Sail University. He was picked up once again in April for violating that protection order after carrying a cross across the street while WWE filmed.

His court date was today and it was quite a wild ride to begin with. He showed up with a red clown nose on claiming it was his face mask. Then he said that heroes don’t wear masks. He really irritated police officers along the way.

Montalvo didn’t start off his court hearing on the right foot by calling the female judge “baby girl.” When his time came to state his case, he cut an absolute promo on the judge.

“Taxpayer dollars are being invested in the business [WWE] and where it is which happens to be on the same street of where I live on, okay? And I grew up right down the street from the WWE so it’s no different than walking home from school and saying ‘what up’ to somebody on the other side of the street especially when it comes to the business of professional sports entertainment.”

“The WWE is just jealous because I’m offering the WWE Universe including all the wrestling fans and all the wrestlers who paved the way before me a better product than they’re able to provide their viewers due to the circumstances of what’s going on in the world today.”

“My intention is to never hurt the wrestling business, but just ensure the safety of it at the same time. So your honor with that being said years ago I was shot in their parking lot while filming a promotional video while they were all laughing at me and being entertained and telling the police officer that I had a knife on me when I never had a weapon at all.”

Montalvo continued his promo on the judge by saying that this is no different from someone showing up at a WWE event and holding a sign. He also stated that if he was truly breaking the protection order then he’d be in jail and “you can’t take me to jail for having freedom of speech in this country and you can’t arrest me for walking down the street where I live.”

He also stated that the cops put him in the back of their car for two hours with his hands behind his back. This forced him to “urinate on the floor of the cop car. because they had me locked up like an animal, but I still showed love through all that hate.”

Montalvo then stated that he is able to offer WWE fans better entertainment than Vince McMahon and Triple H. He said they should be happy that he’s made it as far as he has too.

“I just want to ensure y’all that I am the business. Nobody’s gotten hurt and I am the business of professional sports entertainment and I don’t think WWE should be jealous of me anymore. They should be happy that I made it this far in life to reassure them — including McMahon and Triple H that I was able to offer the WWE Universe and everyone a much better product especially after they tried to destroy my future.”

“They put a mental health stigma on me having doctors over medicate me, having me locked in jail for chasing a dream that I’ve always had.”

He wouldn’t agree to WWE’s request to stay 1,000 feet away from company property unless they met one demand. Then he stated his argument while claiming that his father is Blade star Wesley Snipes.

“They would have to agree to the agreement would have to be this. It wouldn’t be 1,000 feet because WWE doesn’t own the streets where I walk. If that’s the case then you’ll have to cut my father Wesley Snipes a tax break on his taxes and McMahon’s gonna have to cover the taxes that are being refurbished because doing all that time in jail of what I had to go through I have a right to walk where ever I have to go.”

“Here’s what I propose: if I can can ever get the diva of my dreams — [to his father off-camera] do you think it can happen dad? I’ll keep praying for it. — I propose to WWE that I can reassure them a product that they can never ever ever build in their Performance Center of professional sports entertainment and everybody who views every form of entertainment of something more than what they’re giving… I can throw that on the table. We can do 100 feet, but it’s not gonna be 100 feet because this is where I grew up so I’m gonna continue walking the streets. 1,000 feet means that we can’t get no tax breaks over here so I’ll have to call my father Wesley Snipes because dad — we gotta get a tax break for my other father Wesley Snipes because WWE is trying to invade on my territory and get me on invasion. So I need to get some taxes due.”

“If Hunter Hearst Helmsley is willing to pay my father Wesley Snipes’ taxes and get the invasion then maybe we might be able to work out a deal.”

Montalvo encouraged the judge to check him out on Facebook. He said he dressed up this morning to “make an impression.” Then he had one more suggestion as part of his defense.

“That’s all I want. I just want WWE and the police officers to come to that Jesus meeting and reassure that they did lie about me and I did almost lose my life and I had to fight my way back into the light with Jesus Christ.”

He continued to accuse WWE of lying and manipulating him. He stated that a doctor over-medicated him as well. No new court date was set. This was quite an interesting day in court and he filmed the entire thing which you can check out below.