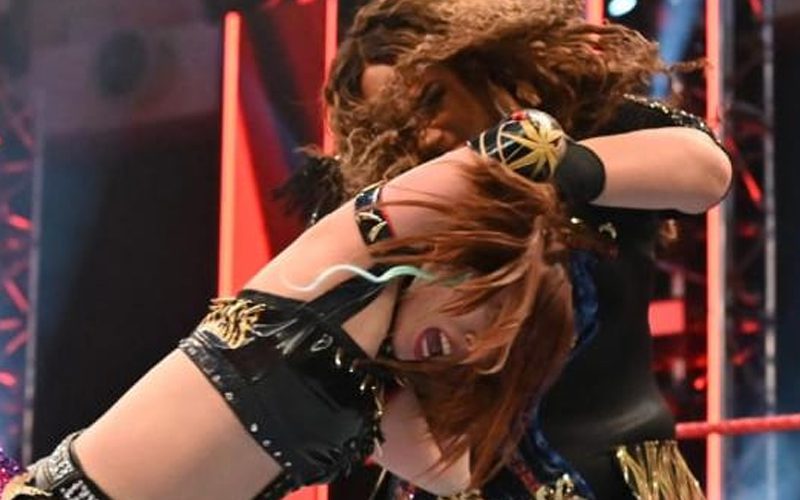 Kairi Sane suffered an injury during WWE’s Tuesday television tapings. She was wrestling Nia Jax and a bump into the ring steps resulted in Sane’s head being busted open badly. It’s unclear how WWE will edit around this injury, but the match needed to be stopped so Sane could be checked on. After saying she could continue, the match was re-started and finished.

It’s unclear how much of Kairi Sane vs Nia Jax will air on television. WWE has the ability to not air any of it if they choose. During Wrestling Observer Radio, Dave Meltzer stated that he’s talked to several people who saw the spot go down and he was able to give us a better idea of what happened.

“Everyone I have talked to have said that no one is blaming Nia Jax. This was not Nia Jax’s fault even though other things have been. Basically, Kairi Sane got whipped into the ring steps. One person said that she may have stumbled, she was trying to take it on her side, she did take it on her side. Her head did hit the steps. One person told me she was in control of her bump and she made it look too good.”

“[Kairi Sane] was trying to avoid her head hitting the steps, her head hit the steps. She was bloodied up. She was knocked silly. She’s okay — now okay doesn’t necessarily mean she doesn’t have a concussion. I don’t know if she does or if she doesn’t, but she’s okay. If she has another concussion you know coming off of the last one it’s not that okay.”

It was also reported that another person said that Kairi Sane was “knocked out” during the spot. We’ll have to see how WWE edits this match together when the episode airs.

A lot of fans are upset about this because Nia Jax has been involved in some mistakes in the ring before that resulted in her opponent’s injury. It appears that nobody in WWE is holding this incident against the Irresistible Force.