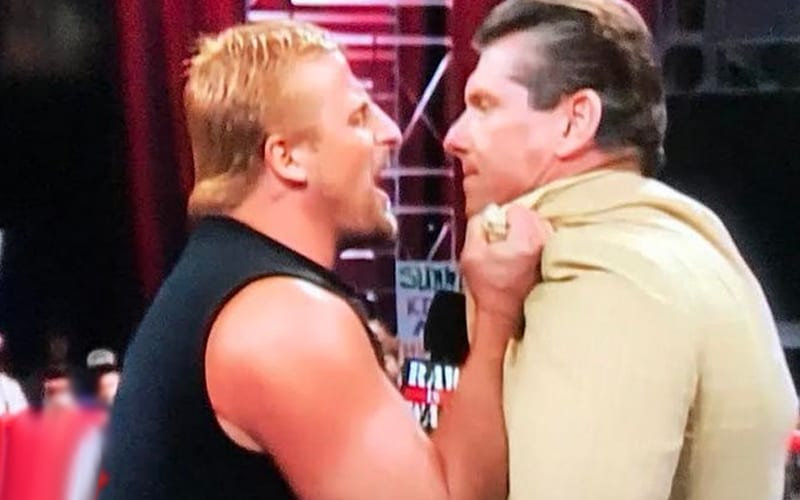 Owen Hart was in an tough situation when his brother Bret Hart left for WCW. There were a couple of stories that Owen rejected because he didn’t want to take part in salacious roles like cheating on his wife with Debra McMichael. Then WWE offered him a return to the Blue Blazer gimmick and he went with it.

During Dark Side Of The Ring’s season two finale, Jim Ross discussed an interaction he had with Owen Hart before Over The Edge started. He got the impression that Owen Hart didn’t want to do the stunt that took his life.

“I had a feeling that day that Owen was not his normal exuberant enthusiastic self about what he was doing that night. I remember saying something like, you know, ‘better you than me, I don’t like heights.’ He said, ‘I don’t either.'”

“I think he was a little concerned, and look, he’s the one who’s gotta do it. Nobody could do it for him. There’s no stunt double. There’s a couple little things he said and maybe more specific what he didn’t say led me to believe that he’s not totally down with this thing.”

Owen Hart’s passing resulted in a hailstorm of controversy that lives on to this day. Martha Hart sued WWE for wrongful death, and Vince McMahon sued her right back.

WWE was morphing into the Attitude Era. This left talented wrestlers like Owen Hart looking for something to do. It would have been incredible if WWE had something else to do other than go back to the masked Blue Blazer gimmick.