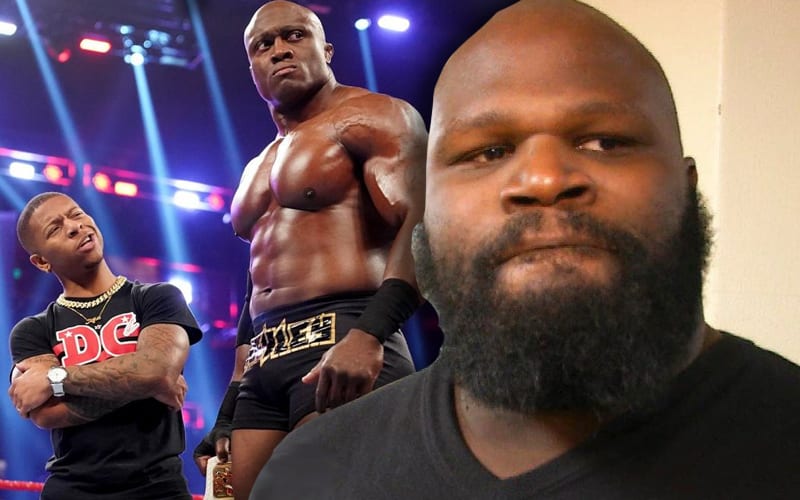 Lio Rush popped off on social media about Mark Henry and he stirred up some trouble with the World’s Strongest Man. Rush stated that Henry doesn’t support African American wrestlers. Henry said he might sue The Man Of The Hour over this.

While speaking to Alex McCarthy, Bobby Lashley said he loves Lio Rush. The two had an entertaining long-term partnership on WWE television. When Bobby Lashley was asked about Rush’s current beef with Mark Henry he didn’t want to comment about it too much. He can just confirm that Mark Henry isn’t the kind of guy to tear anyone down and he hopes they can work things out.

“You know I’m not getting into that. I had a text message before we got on and just put ‘laugh out loud’ to it. I don’t wanna get into it, but It’s not like that man. I think in this wrestling business a lot of tempers arise and different things for not understanding.”

“One thing we don’t wanna start to do is putting ourselves against each other. That’s one thing we always did in the wrestling business is we shook hands when we came in the door. So I respect you, I respect everybody, I respect everyone and if you could send me an article where I downplayed someone or made them look bad or said something negative send it to me because I don’t know that I’ve ever done that and I never will.”

“We’re all going out there with one goal and it’s to entertain the fans and make money together. I hope when I read this stuff with Mark Henry and Lio that it’s not going to be something that’s gonna bring each other down. [I hope] it’s just a confusion of something and they can keep moving forward.”

Hopefully, Mark Henry and Lio Rush can come to some sort of resolution. Things weren’t looking too good yesterday as Rush continued throwing barbs Henry’s way on social media even after Mark Henry told TMZ that was was considering a defamation lawsuit.