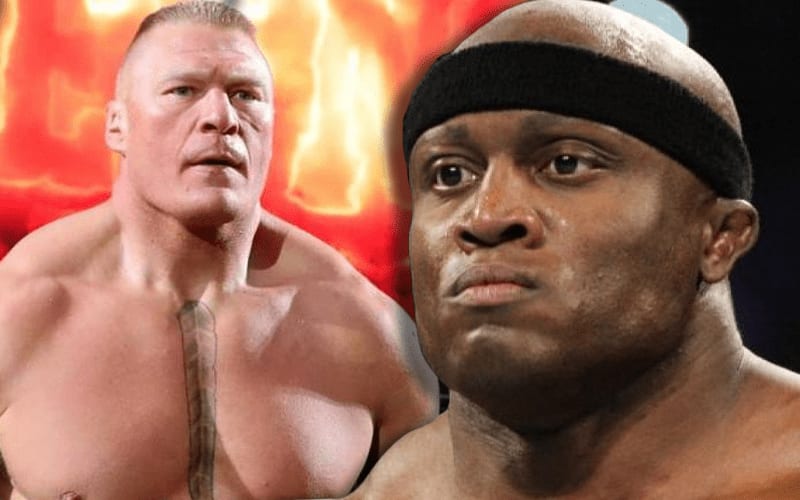 Lio Rush followed Bobby Lashley around as his hypeman for a while, but that act was eventually split apart. Lashley previously stated that it was because he and Lio were getting over too much. Now that Rush is no longer with WWE he can speak about his time with the All Mighty.

While discussing his WWE run with Inside The Ropes, Lio Rush was asked if the company had any plans for Brock Lesnar vs Bobby Lashley. The Man Of The Hour stated that it was definitely something that he and Lashley wanted. WWE had their own plan.

It was in me and Bobby’s plans but I don’t think it was in the company’s plans. We always brought it up, we always tried to pitch it. It felt right you know Bobby was pretty open that he came back to the WWE because he wanted to wrestle Brock so I thought it was inevitable. I built a relationship with Paul Heyman very unexpectedly. I was in promo class in NXT. Paul Heyman stood there and watched me cut my promo. He took me aside and told me how good I did. Then once I got to RAW, he helped me develop my character a little bit so I naturally had that relationship with Paul Heyman, it was clear Bobby wanted to wrestle Brock, they’re both built as these beasts with managers who could talk, so we thought that it was gonna happen but it just unfortunately never did.

You can never say never in WWE. Brock Lesnar and Bobby Lashley could make money working against each other. Lesnar doesn’t work very often so it would need to be something that they really want to see happen.