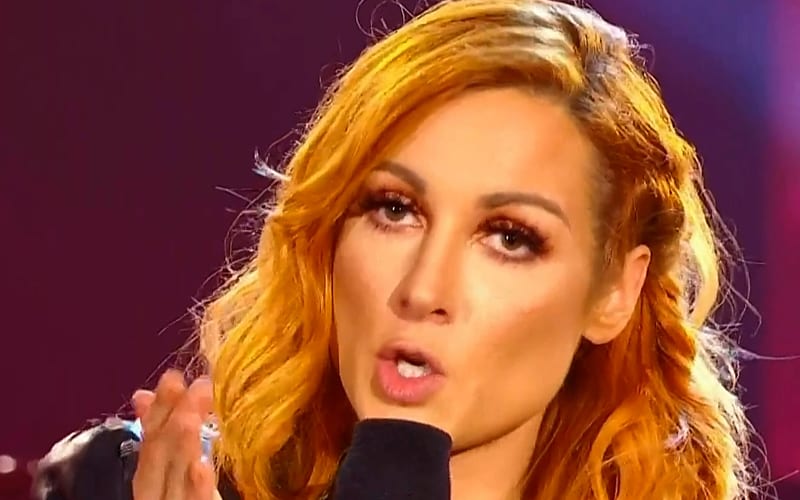 Becky Lynch hasn’t been on WWE television since WrestleMania. Tonight she revealed the reason for that absence. The Man is pregnant.

Lynch was originally scheduled to confront Asuka this week. The Empress Of Tomorrow won the 2020 Women’s Money In The Bank contract. She cashed in that contract in a very unique way this year.

Becky Lynch walked out to kick off Raw. She was also carrying Asuka’s newly won Money In The Bank briefcase. She was also missing the Raw Women’s Title. Lynch was crying and said it was no ordinary night for her. She said she was “torn between joy and sadness.”

Lynch said she asked the “decision makers to raise the stakes” for the Money In The Bank match. Then she went into her history and started to cry as she spoke of her journey through WWE.

She said the fans grabbed onto her and she grabbed onto them when she had nobody else. Then Becky Lynch said “I have to go away for a while.”

Asuka came out and ruined the moment while screaming about how the Money In The Bank briefcase is her’s. Lynch said Asuka has beaten her when nobody else could which is why she is glad that Asuka won the match last night.

The Man opened the Money In The Bank briefcase with a combination and the Raw Women’s Title was inside. She said “I can’t fight anymore, but you can.” Then Asuka celebrated her win. She danced away with the title leaving Becky Lynch in the ring.

Becky Lynch congratulated Asuka. She said “you go be a warrior because I’m going to go be a mother.” Asuka acted surprised like she was hearing this for the first time. They hugged and then The Man walked away with a tear in her eye.