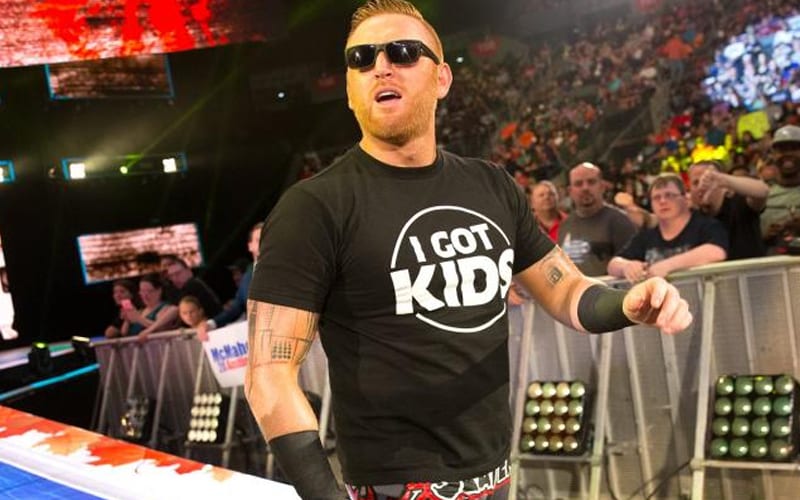 Happy accidents happen all the time in life. For Heath Slater, it resulted in a catchphrase that will probably follow him throughout his entire career.

Click here to find out what Heath Slater has planned for his new post-WWE name.

While speaking to Chris Van Vliet, Heath Slater revealed that his famous “I Got Kids” line came about in an unexpected way. It never would have happened if he had been able to remember his lines.

“Brother, I literally had a promo with Brock and halfway through the promo, like because it’s one of those interaction ones me and Paul are going back and forth and I forgot my next line and I’m like ‘sh*t, damn’ you know. So next thing I know Paul delivers his line and I just remember saying something like, ‘I got kids! I have to do this!” I just went off I said whatever I wanted to where at least the people liked that so they giggled like, ‘yeah, come on Slater!'”

“It’s one of those things where you’re out there and with all the written promos most of the time you forget, you know because it’s not really you saying it. I just turned into me out there like, ‘I got kids!’ you know? I guess Vince heard that and went ‘that sounds obnoxious — but I love it!'”

The “I Got Kids” t-shirt was Heath Slater’s first-ever single’s t-shirt. He credits that merchandise to an improvised line. It didn’t take a writer to come up with that phrase, and it became something organic that fans latched onto.

If you want to see the promo Heath Slater was talking about we’ve tracked that down for you as well.

Do you think WWE needs to go a little bit lighter on the heavily scripted promos? Sound off in the comments below!