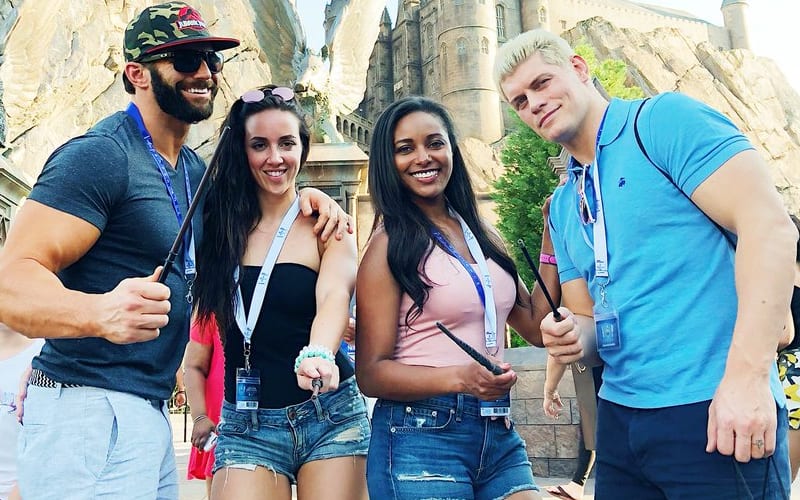 Chelsea Green is poised to get a nice push in WWE NXT as the main representative of the Robert Stone Brand. She is also not going to hide who she really is online.

Green recently spoke with Win Column Sports about her social media activities. This is something she gets a considerable of attention for, especially when she drops thirst trap photos.

While she was in Impact Wrestling, Chelsea Green got some heat for posting out of her Hot Mess character and breaking kayfabe. She didn’t care about that. Green wants her fans to know who she is. The same is true in WWE NXT because she doesn’t care if fans know she hangs out with AEW executives because they are her friends.

“I really struggle with that, actually. I kind of get people telling me all sorts of different things when it comes to social media. When I was with Impact, a lot of people were kind of annoyed that I would post as myself, but then also post as the Hot Mess. But, that’s what I love about my job and about social media is I can choose. So, I really didn’t give a s**t that people thought that was annoying or it broke kayfabe, because at that point it’s 2018 and people know that I am dating who I’m dating and that I live where I live and they know who my good friends are. So, they know that when I leave the Impact Zone or when I leave NXT, I am not the Hot Mess. But, of course, yeah, my co-workers kind of were a little bit annoyed, a couple of them, but I think they quickly realized, like, ‘look, she’s playing a character, it’s who she is.’”

“We really haven’t had many people like that in the generation of social media that have to figure this out, because everyone in wrestling is kind of an extended version of themselves, and the Hot Mess really wasn’t. It was a true character. I have to say, it was difficult, and I struggle with it every day. I struggle with how much do I give away versus what I want to keep private and stuff like that. All in all, I just like my fans to know exactly who I am, and that’s every side of me, whether it’s my family, my relationships, my friends, and I don’t give a s**t if a friend is in a different company. I’m sorry, but I’m going to post with Britt Baker and Cody Rhodes and Brandi Rhodes. I don’t care. They’re my friends. I get a little bit of flack for it, but I think everyone is pretty understanding nowadays.”

Cody and Brandi Rhodes are the couple responsible for introducing Chelsea Green to Matt Cardona in the first place. When they go to a Disney theme park on a double date it’s a safe bet that Chelsea Green is going to post any picture she wants from her experience.

What do you think about WWE Superstars breaking kayfabe on social media? Sound off in the comments below!