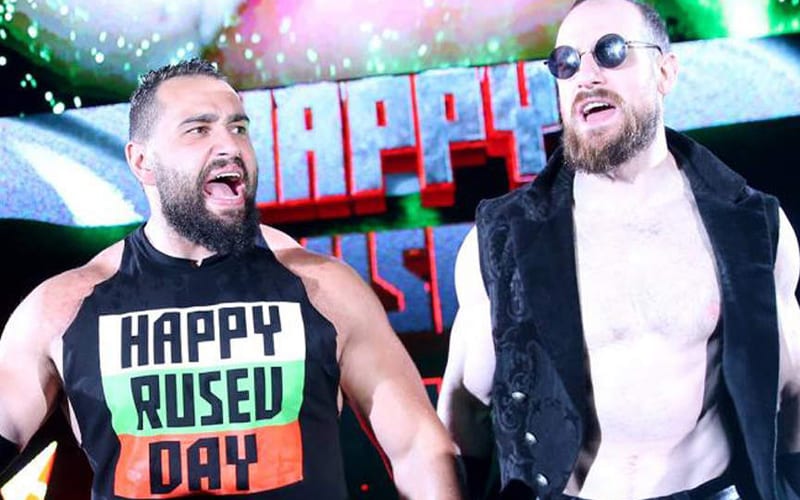 Rusev and Aiden English were both released on April 15th, but their union had long since separated on WWE television. Now that they’re both on their own it is possible to get the act back together and see if it receives the same groundswell of support while using different names.

As he revealed to Inside The Ropes, Aiden English said that he lucked into the Rusev Day gimmick in the first place. WWE had zero plans for it to become a thing. The audience loved it and WWE paid attention. Before they knew it, “Rusev Day” was one of the hottest chants in the entire company.

“By pure circumstance, I end up in a match with (Randy Orton) while he’s kind of starting this thing with Rusev, and so it was really coincidental and I don’t think (it was) meant to become anything,” he said. “I was just there since I was literally already there, caused some kind of distraction which helped Rusev, then the next week we had that big ceremony where I sung the Bulgarian national anthem for the first official ‘Rusev Day.’

“As far as I know, that’s literally all it was supposed to be, this kind of crazy ceremony. Randy interferes, drop, boom, him and Rusev carry on and that was it, I was back to whatever I was doing. But it got such a good response both in the arena and social and everything that they’re like, ‘Well, let’s do something next week. Get the tux back we’ll do something else.’ And then it was like a backstage and then they were like, ‘Okay well, let’s do something else.’ And all of a sudden it was like, ‘Alright well, now you’re going to come with him on live events.’ And then it just went from there. I remember by Survivor Series, two months later, there were people in every building chanting Rusev Day, and the rest is literally history. It was so organic, man.”

It might be a while before the indies open up, but you can never count Aiden English out. He stated prior to his WWE release that he wasn’t done in the ring despite the fact that WWE kept him in a commentary position.

Hopefully, there will be a lot of interest in Aiden English’s services as he gets ready to show the world what he has prepared.