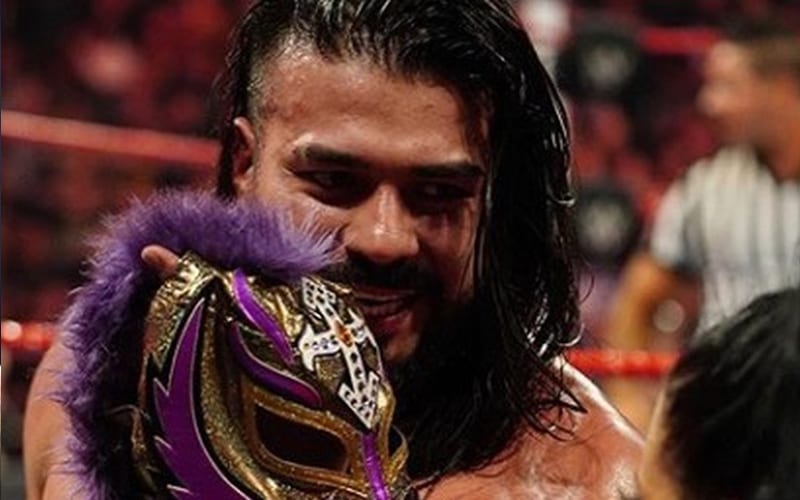 Rey Mysterio hasn’t lost his mask in WWE, but he seems open to putting his mask on the line in a retirement match. WWE teased putting Mysterio’s famous hood on the chopping block, but the match was never booked.

Andrade targeted Mysterio’s mask for the longest time. He even managed to pull Rey Mysterio’s mask off his face a time or two. There is a reason why Andrade wanted that mask off Mysterio, and it goes pretty deep.

Before Andrade was a WWE Superstar, he was a masked wrestler named La Sombra. He misses that mask, but he lost it in a match which you can watch below.

Andrade revealed to Fightful that his character’s motivation for wanting Mysterio’s mask was rooted in his own pain from losing the La Sombra mask in Mexico.

Andrade spoke of the tradition and history of the mask, and wears a necklace with his old mask on it. He says that his character ripped the mask of Rey Mysterio off because he wanted something to end Mysterio with. He was personally angry when he lost his own mask, so from a character standpoint, he wanted that to happen to Mysterio.

A lot of thought goes into the stories we see on television. It’s very interesting to know the motivation Andrade pulled from to drive his character toward Rey Mysterio’s mask on a weekly basis.

You never know if Rey Mysterio’s mask might be up for grabs eventually. Odds are Andrade will pull for that match if he can.

Do you think Rey Mysterio should lose his mask before retiring? Sound off in the comments below!