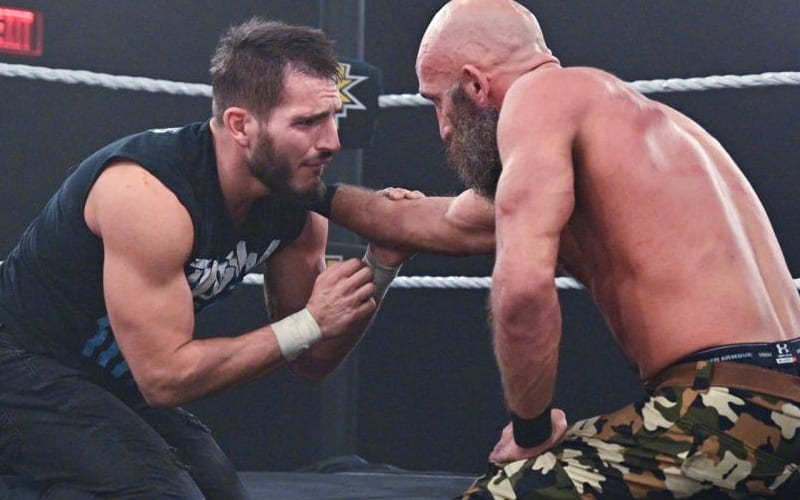 Killer Kross and Scarlett Bordeaux are slowly making their presence known on WWE NXT. The two haven’t been officially revealed, but Kross did take out Tommaso Ciampa in a backstage attack.

While speaking to Planeta Wrestling, Johnny Gargano was asked about Karrion Kross jumping Tommaso Ciampa in NXT. Gargano didn’t go into much detail because he’s done with Ciampa. He did name drop Kross and Scarlett’s names in the process of explaining that he doesn’t care.

“From what I saw — I saw Tommaso Ciampa call me the better man on television and that’s all I really wanted. My rivalry with Tommaso Ciampa is done. He can do whatever he wants to do. He can go with Kross, he can go with Scarlett. He can retire. He can go start mopping floors if he wants. He can become a mechanic. He can start working at McDonald’s, whatever Tommaso wants to do. Good luck buddy, because I am done. All I wanted was for him to say I was the better man, he said I am the better man.”

“Now me and Candice are celebrating and we are off on our own path and like I said our own path is eventually I do believe that we will make history as the first married couple to be NXT Champion and NXT Women’s Champion. We can all look forward to that one day.”

Karrion Kross and Scarlett Bordeaux haven’t been named on NXT television yet. Kross’ merchandise did appear on WWE’s shop so that gave away his new name.

Johnny Gargano doesn’t seem to care what Tommaso Ciampa does next. He’s off on his own journey with toward the NXT Title.

What do you think about how WWE is bringing Kross and Scarlett into NXT? Sound off in the comments below!