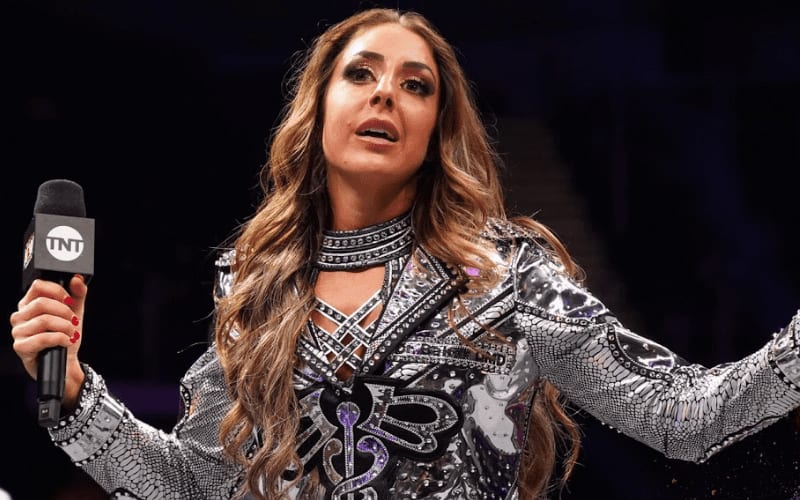 Britt Baker appeared on a lot of fans’ radars when she signed with AEW. She was making a name for herself on the indies for a long time before then. While speaking with Talk Is Jericho, Baker revealed that she almost ended up in WWE as well.

Baker is a dentist. She worked hard to achieve her professional goal and has the DMD title to prove it. That is why it hurt so much when she first started getting booed for being a dentist.

She told Jericho during the podcast that her WWE tryout went well. She received an extra physical and was given hope that she might be signed. Then Canyon Cemen gave her bad news when her dental career got in the way. He just couldn’t pull her from a professional degree like that.

“So, I had to tell a lot of lies to be able to get out of school for that weekend because it’s a couple of days, and actually, my tryout was pretty stacked with talent. Bianca [Belair] was in it, Lacey Evans, Velveteen Dream, Sonya Deville. It was a loaded class and all those names I just mentioned plus myself at the very end got pulled aside to do this extra physical with the doctor and I asked, I’m like what is this for? He’s like, ‘Oh, it’s basically the people on this list have intentions of being hired.’”

“So, I’m like, ‘Oh my gosh, I’m gonna get a job with WWE,’ and never forget at the very end of the camp, Canyon Cemen pulled me aside and if you’re an independent wrestler, Canyon Cemen is like the gatekeeper. You shall not pass or come on in the WWE… and he told me, ‘You really impressed a lot of people at this tryout’ and I was so excited, so excited and he says, ‘As a father, I have a really hard time pulling someone from a professional degree for this business’ and my heart just sank.”

“I was like, ‘Sh*t!’ So a couple of weeks later, I get an email from him saying, ‘You have a lot of the qualities we look for, however we don’t have an opportunity for you at this time but if you have the passion to succeed in this business, you’ll find a way to make this work throughout dental school,’ and I never forgot that, which it didn’t work out in WWE but it worked out to my advantage even better because I’m able to do both careers. I’m a dentist and a professional wrestler on TV.”

Britt Baker waited until she got her degree before signing with a company, but it wasn’t WWE. Britt Baker might never end up in WWE if things continue in the present direction, but she seems pretty happy with the direction her career has taken.

How do you think Britt Baker would have done in WWE? Sound off in our new and improved comments section!