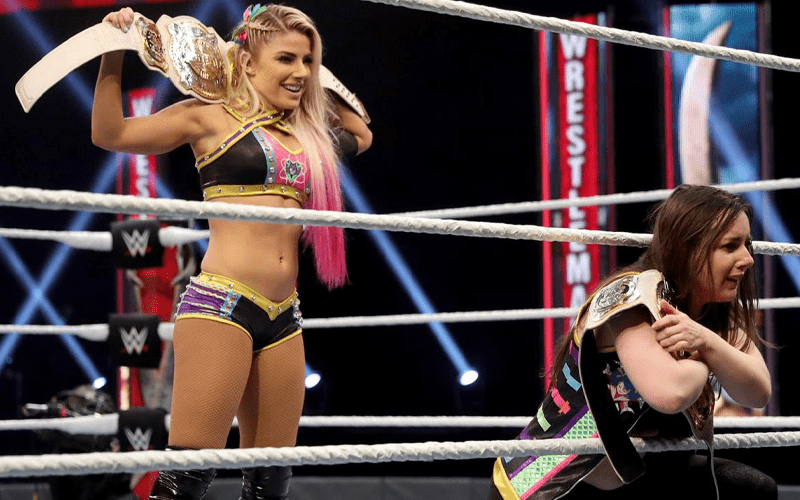 Alexa Bliss and Nikki Cross defeated the Kabuki Warriors at WrestleMania 36 to begin their second reign as WWE Women’s Tag Team Champions. This is a win that took place in the WWE Performance Center, but it just aired last weekend.

Due to the unconventional circumstances surrounding WrestleMania, it left the event feeling a bit unreal for some.

While speaking to Kayla Braxton on The Braxton Beat, Alexa Bliss was asked if it sunk in yet that she won the WWE Women’s Tag Team Titles at WrestleMania. She said it hasn’t registered as real yet, but they haven’t even been granted the opportunity to defend those titles.

When Bliss Cross Applesauce does defend their titles, Alexa Bliss already has some IIconic opponents in mind.

“No [it hasn’t sunk in yet] because with everything that goes on, we have the RAW and SmackDown after WrestleMania immediately after and so far, we haven’t defended the titles yet. So, it hasn’t really set in I think it’ll set in when we have our first title defense.”

WWE could be repackaging The IIconics. The last time we heard that Billie Kay and Peyton Royce were backstage at a WWE event, it was an NXT taping. If Alexa Bliss gets her way, the IIconics could be making an appearance to challenge for those titles soon enough.