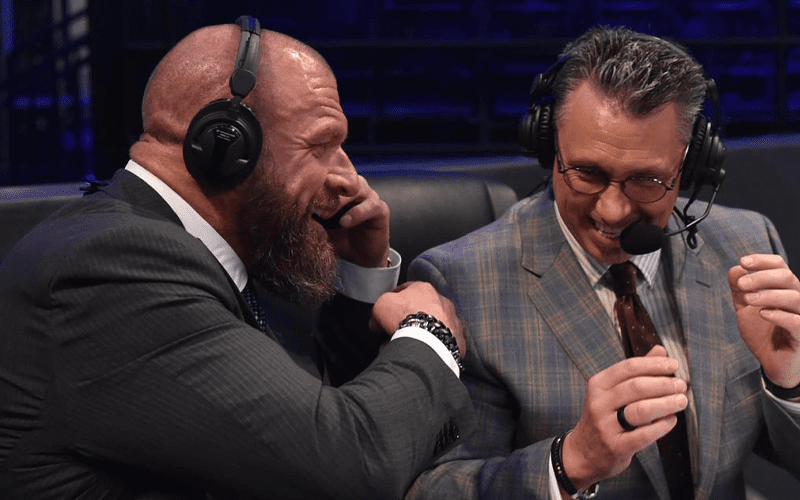 WWE had to figure out a few very interesting problems when they couldn’t put on their show in front of a live crowd. They have a few weeks under their belts, and they might have several more weeks ahead of them before any live fans can be considered.

While speaking to PW Insider, Triple H discussed some of the difficulties that WWE faced when filming at the Performance Center. They had to abide by local and government guidelines. This was something that was very important to keep in mind.

“Well, it’s been challenging for everybody and me being a part of that really extends well beyond NXT to all of it, RAW, SmackDown, WrestleMania coming into the Performance Center. Our team’s medical, working with CDC and with state and local officials to try to in the best way possible, make sure that we’re ensuring the safety of our crew, our staff, our performers, making sure that we’re screening them in the best way possible to keep….even to the point of running the events in waves where we bring in certain talent, do part of the show, they leave, bring in another grouping of talent, do some part of the show to keep people as isolated, so to speak, or within guidelines, it’s been very challenging. But it’s been a challenge we all feel like we’re doing what we can for others.”

“This moment in time, people need an escape and there’s really nothing else out there. We have a unique opportunity, different from the other sports entities out there. NBA, you have to take an entire team, their crew, medical, everybody. You’ve got to put them on a plane, you got to fly them to different cities, you’ve got to expose them to another city and expose them to another city, there are things right now that just make it impossible to do. We can do our stuff in a different manner.”

“We can script out differently, we can shoot things out of order, we can do things in sequence, we can do totally differently to put together a product and still make something entertaining for our fans and that’s what you’re going to see WrestleMania, the ability to blow it out into two days, to make it bigger in some ways, to do some of it live, some of it not live, still incorporate Gronk as a host, do matches that we wouldn’t normally have the opportunity to do that. The Firefly Fun House, The Undertaker’s Boneyard match and do them in different locations and different styles and different feels. It’s an opportunity to do something and hopefully give fans that escape. That’s our goal is really just give them that escape and give them some entertainment, take their mind off all of it.

WWE is set to carry on with taping some kind of television show after WrestleMania. A Florida state-wide stay at home order won’t stop Vince McMahon from proceeding as planned. The company has a couple of ways around that so they can continue shooting.