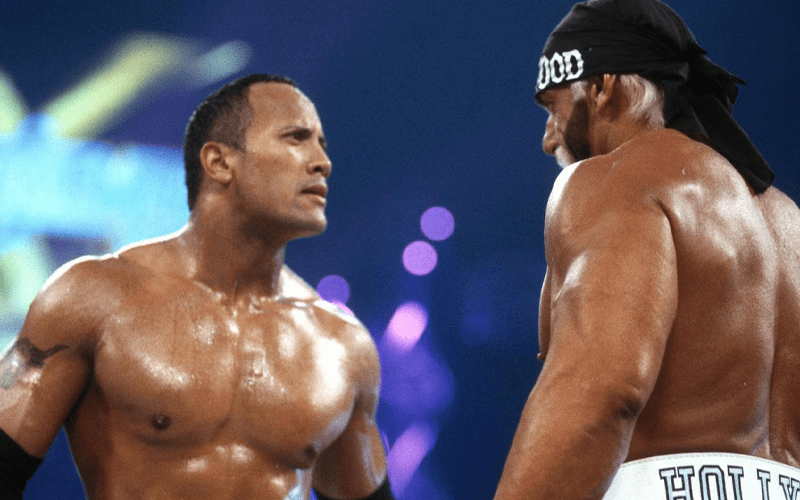 The Rock and Hulk Hogan battled at WrestleMania 18 in an Icon vs Icon match for the ages. The contest accomplished a lot of things including cementing itself as one of the greatest matches in WrestleMania history.

During a recent Instagram Stay At Home live chat, The Rock discussed his famous contest with The Hulkster. The Rock and Hulk Hogan had agreed that the People’s Champ was going to win. There was still a bit of worry in Dwayne Johnson’s mind that Hogan would put him over.

“I remember speaking to Vince McMahon, Pat Patterson, Michael Hayes, about our match, and as we were putting the match together and we were all collectively, including Hogan, just felt like, well, let’s just feel it out there and see where the crowd goes, and then we’ll adjust.”

“We had agreed that I was gonna win the match, but much like WrestleManias before, WrestleMania 3 with Hulk Hogan and Andre the Giant, it was assumed that Hogan was going to win but with Andre, Hogan talks about it still to this day, you never know until match time what Andre is going to decide because he’s the OG.”

“Well, the exact same thing I felt with Hogan, even though we agreed that I was going to win the match and he was going to pass the torch to me. The wrestling world is funny, I’ve learned because I grew up in the wrestling business, that you don’t count your chickens until they hatch, they come out of the egg and it’s happening. So I wasn’t assuming I was going to win. I was just waiting for Hogan to give me the green light.”

Hulk Hogan let The Rock pin him and a WrestleMania moment was created. Now we can look back and see the match for everything it was. If Hulk Hogan decided that it needed to go another direction we would have a much different note in the history books.