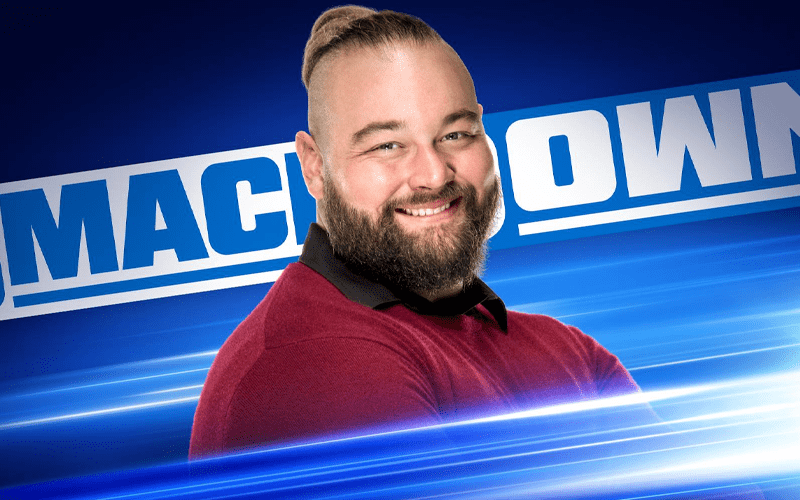 WWE has two episodes of SmackDown to go until WrestleMania and tonight’s show could be an eventful one.

Roman Reigns did not perform at WrestleMania and he was replaced in his match against Goldberg. WWE should explain this big WrestleMania change on tonight’s show.

Bray Wyatt will have another Firefly Fun House. His match against John Cena received a Hollywood treatment at WrestleMania so this should be an interesting build.

Drew Gulak also has a match against Shinsuke Nakamura. Last week a stipulation was set that if Gulak wins, Daniel Bryan will receive a WrestleMania IC Title match against Sami Zayn.

Bayley and The Boss came out. They said it’s not fair that Bayley has to defend her title at WrestleMania in a five-way. Bayley said their plan is going to backfire.

She trashed Paige and then pushed how close she is with Banks as Lacey Evans entered.

They called Evans a loser. Banks made fun of her daughter calling her a “bratty little kid.” Then Evans said Banks won’t be able to say her daughter’s name when she breaks her jaw. She will also take the title from Bayley.

Naomi came down next. She had some trash to talk. She will become the three-time Women’s Champion. “The Glow will shine the brightest once again on the grandest stage of them all.” Then out came Tamina Snuka.

Tamina just started taking all the babyfaces out after saying: “Actions speak louder than words.”

Then Bayley and Banks left before getting demolished by Snuka.

If Gulak wins this match then he will secure a match for Daniel Bryan against Sami Zayn for the IC Title at WrestleMania.

Gulak took advantage early applying the boots. Then Cesaro pulled Nakamura out of the ring to save him from a beating.

Nakamura returned with a kick or three when Gulak went outside. Then Gulak took out Nakamura’s leg and started focusing on the leg to stop those kicks.

Nakamura landed a knee off the top rope for a two count. Then he started laying in more knee strikes on Gulak.

Nakamura went for a Kinshasa, but Bryan pulled Gulak away. Then Drew got a bridging pin for the win.

Dolph Ziggler was backstage. Then Otis ran up on him. People separated Otis from Dolph as he egged him on. Ziggler said that they’re going to have a match at WrestleMania. So that’s that and the match is booked. It will be a singles match apparently.

Elias was shown and he strummed his guitar and he played a song about King Corbin called “Kingdom Of Fools.” He stamped Corbin’s face on toilet paper. That’s a timely joke.

Corbin ran up on Elias and beat him down in the crow’s nest where Elias was. Then Corbin kicked Elias off the overlook balcony thing. They used post production editing to make it look better.

Kairi Sane was not with Asuka. Cross was with Bliss. Cross jumped on commentary and Cole cried “social distancing.” Cross was very excited. She made this entire segment so much better.

The match carried on. Bliss laid in forearms, but Asuka no-sold them. Then Bliss nailed a dropkick for a two count. Nikki sat on the announce table and clapped away while cheering Bliss.

Asuka took Bliss down and danced a little. Then Nikki tried to rally fans by clapping. Bliss took Asuka out of the ring and mocked her. Then Bliss kicked Asuka off the apron to the floor and the brawled outside.

Bliss took a bump into the steps and then Asuka danced some more.

After the commercial, Bliss retained control after nailing Asuka with a kick after Asuka missed a hip attack through the ropes. Nikki cheered so hard she knocked her headset off.

The two battled on the apron and Bliss brought Asuka down hard on the ring apron. Bliss covered for a two count despite Nikki Cross’ cheering. “What is wrong with you? Seriously?” Cole asked her.

Then Bliss nailed another kick on Asuka and moved out of the way to avoid Asuka’s charge. Bliss hit a clothesline and a few punches. Then she hit a senton and Asuka rolled outside.

Bliss sent Asuka into the ring post, rolled her inside and got two two counts. Nikki Cross kept hitting Cole and annoying him.

Asuka grabbed Bliss and she backed the Empress Of Tomorrow into the ropes. Then Bliss nailed a DDT and got the win.