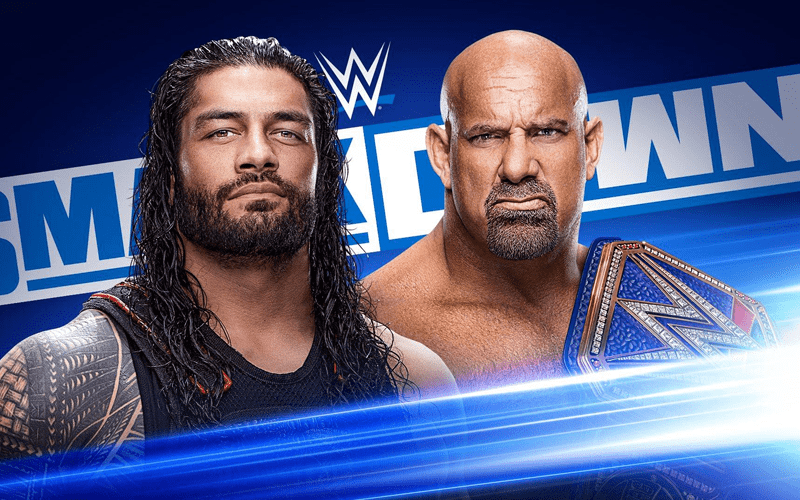 WWE is doing everything they can to keep pro wrestling on the air during this awful coronavirus pandemic. There are only a couple of segments confirmed and zero matches.

The Performance Center will be empty once again this week. The company will also film content for next week’s show tomorrow.

Rob Gronkowski is going to be on the show tonight. He will explain WWE’s plan for breaking WrestleMania into two nights.

Goldberg and Roman Reigns are also going to be on Friday Night SmackDown this week. They will take part in a contract signing.

Cole was in the ring and said that Mania is “too big for just one night this year.” Then he introduced Gronk with Mojo Rawley’s help.

Gronk danced all the way to the ring.

Gronk said he was one of 5 people in the stands when Mojo was in FCW. Now he’s there in front of zero people because he’s still hyped.

Mojo said WWE is a little different from WWE. They can get hit all of the time. They’re both going to have each other’s backs. They started chopping each other because that’s what they do.

Then King Corbin came out to cut a heel promo saying that Gronk’s setting himself up for failure if he’s taking advice from Mojo. Corbin told them to get on their knees and bow down. Gronk said they don’t get on their knees.

Corbin said he used to eb in the NFL. They wear no padding in WWE. He said that Gronk needs to “fall in line like everyone else or I’ll make sure your little party is over.”

Elias came out next and said that he’s had a song ready to go for weeks that he wants Corbin to listen to. Then Elias started playing. Gronk and Mojo danced behind him. The song was about how Gronk will take off Corbin’s head.

Corbin cut him off and stood up to Gronk. Then Mojo Rawley got on his knees and Gronk shoved Corbin over him and the King fell. Elias threw him out of the ring. Then Gronk “advocated” that King Corbin and Elias have a match at WrestleMania.

Zayn sat in on commentary. Bryan and Nakamura started out the match. Then Gulak tagged in. They wrestled around Bryan took the tag while they put over this new team’s promise on commentary.

Bryan hit a suicide dive on Nakamura and then he dove off the top only to be caught by Cesaro and nailed with a backbreaker. Cut to commercial.

When we came back Daniel Bryan was still taking a beating. You could tell they wrestled through the commercial.

Cesaro hit a belly to belly and got a two count. Then he continued to beat Bryan down as he threw him from turnbuckle to turnbuckle while hitting forearms. Bryan caught a move in retaliation and everyone got tags.

Gulak came in hot. He hit Nakamura with a German suplex for a two count. Nakamura got an armbar, but Gulak got out. Cesaro and Nakamura double teamed Gulak as they hit him with a sky high European uppercut. Daniel Bryan broke up the pin and then he got thrown back out.

Gulak continued to take abuse and then he nailed a stiff clothesline on Nakamura.

Cesaro nailed a kick to the face and then Gulak tagged Bryan. Then Bryan hit a double team sunset flip pinning move for the win.

Bryan and Gulak were backstage breathing deep and stretching deep. The Artist Collective came up and Zayn said that all they’re doing is squeaking out a win. Zayn wanted to know when he was going to listen to the great liberator. He said he’s untouchable. Then Daniel Bryan challenged Sami Zayn to an IC Title match at WrestleMania.

If Drew Gulak can defeat Shinsuke Nakamura next week then the match is on.

Michael Cole introduced Paige who was on via satellite.

Bayley came out early on and cut her off. She welcomed Paige to their show. They had a little back and forth then Bayley told Paige to get on with it so we can all forget about her.

Bayley mocked Paige’s accent. Then Paige said it’s bad enough that they get to run their mouths every week. Paige said it takes more than greatness to make it, it takes courage. Paige said that Bayley and Banks lack courage. Then Bayley said she’s the best and she’s beat everyone unless she wants to do something about… oh yeah that’s right she can’t. She really rubbed it in.

Paige said she wouldn’t wish her situation on anyone because she can’t wrestle anymore. She said she can’t wait to announce her match at WrestleMania.

Paige said Bayley will defend her title against Lacey Evans and Naomi and Dana Brooke and Tamina. Sasha Banks called Paige a bitch before she revealed that Banks is in the match too.

They skipped the entrances. That was a bit disappointing.

After the match was over, Michael Cole shot to Wyatt and Cena’s bit last week on SmackDown.

The Miz & John Morrison came out and had a good time playing to the fans who weren’t there.

They went backstage where Kayla Braxton interviewer Nikki Cross & Alexa Bliss they weren’t happy and wanted a shot at the Women’s Tag Titles. Bliss challenged Asuka to a match next week.

The Miz & Morrison were back in the ring. Miz said that they should ask the audience here tonight who they think should get a title shot at Mania. Then they showed Miz and Morrison in the crowd dressed up like I guess, the New Day, then they were shown doing impressions of The Usos. They showed up next dressed like bacon acting like Heavy Machinery. They cut back and forth and had a big of a conversation. It was what it was.

The Miz and John Morrison remained in the ring and said that not even they can decide who will get the Mania title match. Out comes Heavy Machinery for real.

When we came back the match had already started and Otis was shoving The Miz around the ring. Morrison took the tag and Otis absorbed a few kicks.

Then Otis refused to be Irish whipped and Morrison jumped on the apron and leaped over him. Tucker took a tag and hit a suplex. Then Miz took the tag. Otis came back in and he continued to dominate Miz.

Heavy Machinery sandwiched Miz and then double teamed Morrison out of the ring. Then Tucker nailed a somersault dive off the apron.

Then they got back in, Miz shoved Tucker into the ropes while Morrison held the top rope down. Tucky spilled outside and they double teamed him a bit.

Morrison got the tag and hit a forearm and a slingshot elbow drop for a two count. Tucky kept kicking out every time Morrison tried to close out the match.

Miz tagged in and hit a gut buster on Tucker. Then Tucky fought out of the corner. Just as Otis was about to take the tag, Dolph Ziggler came out.

Otis was distracted, Miz shoved Otis off the apron and he almost got a tag on Tucker.

Dolph Ziggler went to ringside and jumped on commentary as the match continued.

Otis started to rally and he hit slams on everyone. Then Otis pancaked both of them before hitting a double Caterpillar. Before the end of the move, Ziggler grabbed the mic and he showed Otis some pictures of himself with Mandy Rose. Ziggler walked about how happy they are in those pictures and how that will never be Otis.

Otis went for Ziggler, but Dolph tried to run. Then Otis caught him and Morrison stopped Otis from nailing Dolph with a chair.

Otis grabbed a chair and Tucker tried to stop him from using the weapon. He thought about it, but still destroyed Miz & Morrison with a chair.

Otis raged a bit more and then Tucker held him while Otis cried.

Roman Reigns and Goldberg both came out into the empty PC and took the ring which was done up in their typical contract contract table set-up. They both chucked their seats out of the ring. Those were good office chairs, too.

Cole asked Goldberg who he expected to take his challenge. Goldberg said he was hoping it would be Roman, but he didn’t think he had the balls to face him.

Cole asked Roman why he stepped up to Goldberg. Reigns said all the greats have chosen him and they all lost to him, too. “You ain’t gonna be any different, Bill.”

Cole then asked Roman why he took a little shot at Goldberg. He then said that Goldberg is a “little bitch Bulldog sitting in his yard holding my title that he never earned.”

Goldberg said he’s been destroying doors all over with that headbutt and come WrestleMania he’s gonna be the next victim. Then Goldberg threw the table to the side and he got in Roman’s face to have a stare-down as the show went off the air.