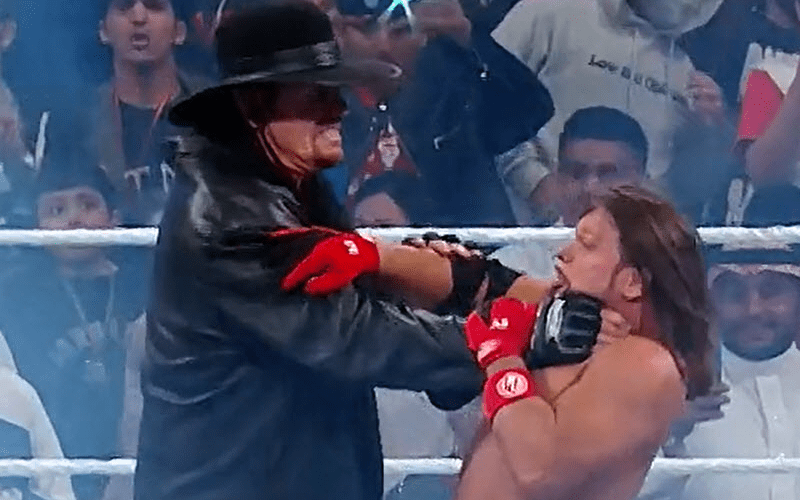 The WWE Super ShowDown event started out with the Tuwaiq Trophy Gauntlet. T-Truth and Bobby Lashley were the first two competitors in the match and it would be a long match for Truth. It would also be a very surprising experience for AJ Styles.

R-Truth defeated Lashley with a roll-up pin. This was followed by a bad beat-down from Bobby Lashley. Truth took a bump into the stairs and a spear from Lashley. He was busted open under his eye in the process.

Andrade entered the match while the referee cleaned up Truth. El Idolo was fresh off of his suspension of failing WWE’s Wellness Policy test. R-Truth got the pinfall on Andrade after the two bumped heads and the 34 time WWE 24/7 Champion pinned the current United States Champion by falling on him.

Erick Rowan came out with his cage of mystery and he immediately slammed Truth down and continued to work on him. The beating continued as Rowan used the ring steps on Truth which got him DQ’ed. He wasn’t finished and he continued to destroy Ron Killings in the ring with a clawslam.

AJ Styles didn’t have much of an opponent when he came out. He danced around Truth and mocked him while keeping Killings down with kicks. Then Styles made Truth tap out to a calf crusher.

Rey Mysterio’s music played, but he didn’t come out. Karl Anderson and Luke Gallows were displayed beating him down backstage.

AJ Styles declared victory for himself and wanted them to ring the bell and end the match, but they didn’t. Then Mike Rome announced that they were giving AJ Styles’ “opponent” a count of 10 before Styles would be declared the winner.

The OC was shown again backstage, but this time they were on the floor and The Undertaker’s iconic boots were seen walking by the camera.

Then The Undertaker made his entrance and he received every gimmick WWE could give him with lasers, flames, blue lights, and smoke. The Undertaker stood up to AJ Styles and the Phenomenal One wasn’t happy.

Taker chokeslammed Styles and pinned him without taking off his jacket or hat. 1-2-3 and The Undertaker won the Tuwaiq Trophy Gauntlet.

AJ Styles and The Undertaker are slated to collide at WrestleMania 36. This was a very interesting turn of events. Styles is fresh off of a separated shoulder and he only took one chokeslam bump. The Undertaker didn’t even take off his entrance attire before winning.