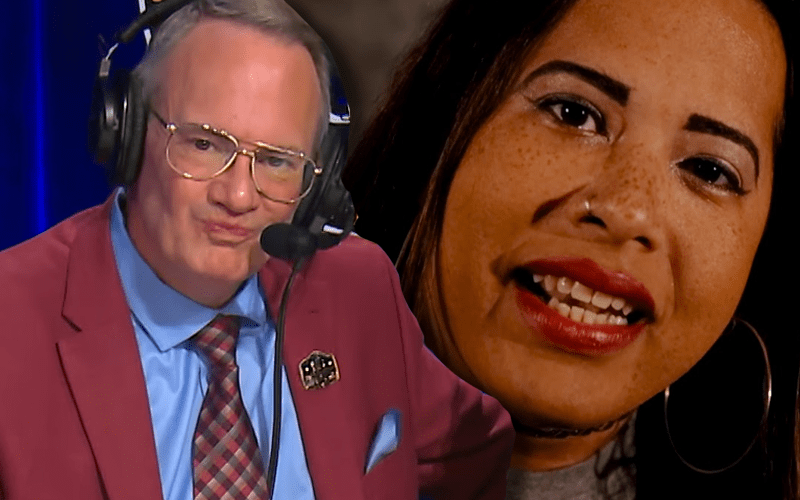 Nyla Rose is AEW Women’s World Champion. She is also transgender, but you wouldn’t know that if the only way you consumed All Elite Wrestling was by watching Dynamite.

Rose has made no secret about her transgender status. She is proud to be an advocate and hero with a social responsibility. Nyla Rose’s status as a transgender woman might be the talk on the internet, but it hasn’t been brought up yet on AEW Dynamite.

During the Jim Cornette Experience, he discussed the current situation that AEW has with Nyla Rose. Cornette doesn’t have an issue with Rose as a transgender woman. He only thinks that AEW isn’t using Nyla Rose to her full potential as a heel. That was also one of the same points that Val Venis was trying to make.

“Is the only place that they don’t say this is on the television show where they’re trying to sell her as an attraction? What the f*ck?!”

“I’ve said this before now that I have all the facts here. Get back to Renee Richards in tennis in the 70’s. This has been an issue. You still see people debating it.”

“This is a controversy. Make something out of it! When you’ve got a trained pro wrestler who can do all this sh*t and is 100 pounds bigger than her opponents then hammer her through everybody especially these school girls.”

Cornette proposed that All Elite Wrestling should paint Nyla Rose as getting an unfair advantage. She is transgender which is still obviously a controversial topic. A manager might help get her over even more as a heel.

“That’s what people need in pro wrestling is to get stirred up and offended.”

AEW is not acknowledging her transgender status at all on Dynamite. In fact, Cody Rhodes suggested that people just ignore the negativity instead of engage a larger social discussion.