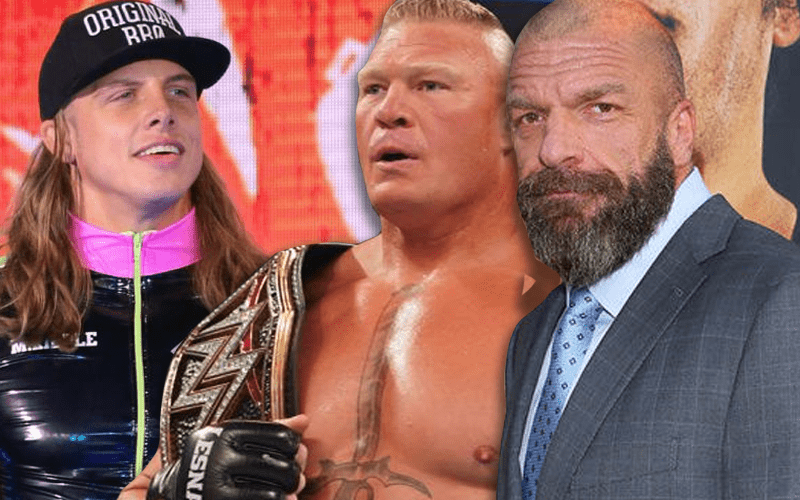 Matt Riddle has made no secret about the fact that he wants to retire Brock Lesnar. The two had a conversation backstage at the Royal Rumble where Lesnar told Riddle to stop tagging him on social media because a match isn’t happening.

There was also a report that Matt Riddle has backstage heat with Vince McMahon now over the situation with Brock Lesnar. McMahon reportedly sees Riddle as “an outside guy.”

During the NXT TakeOver: Portland conference call, Triple H was asked about any backstage situation between Riddle and Lesnar. He really didn’t know what to think at this point, but he is entertained by it.

“Nobody’s asked about it. Certainly Vince didn’t express his disapproval of anything that was said and I’m sure that if there was an issue then he would have called me directly. I don’t know if you’ve ever meet him he’s not shy about that.”

“So, you know I didn’t see that. I heard what you heard. There was a conversation between the two or whatever and Matt’s Matt, Brock’s Brock. They had a conversation that’s between them they’re men and I don’t mean that to be disparaging to anybody, but they’re grown adults, let’s just say that.”

“They had a conversation that they did, whatever they decided among themselves, you know to be honest, I read something and sometimes I don’t know if that’s a work or that’s legit, but honestly I don’t care either way from that standpoint. I’m entertained by it. If someone has a problem with it then they’ll come to me and I’ll help deal with the problem.”

Triple H said that Matt Riddle is a very unique personality, and he’s very vocal. He also went on to say that Brock Lesnar’s mindset could be if Riddle’s willing to write checks then he’d better be willing to cash them.

This is an interesting situation as we’ve heard several differing reports at this point. Brock Lesnar and Matt Riddle are being kept separate in WWE and that’s all we know for certain.