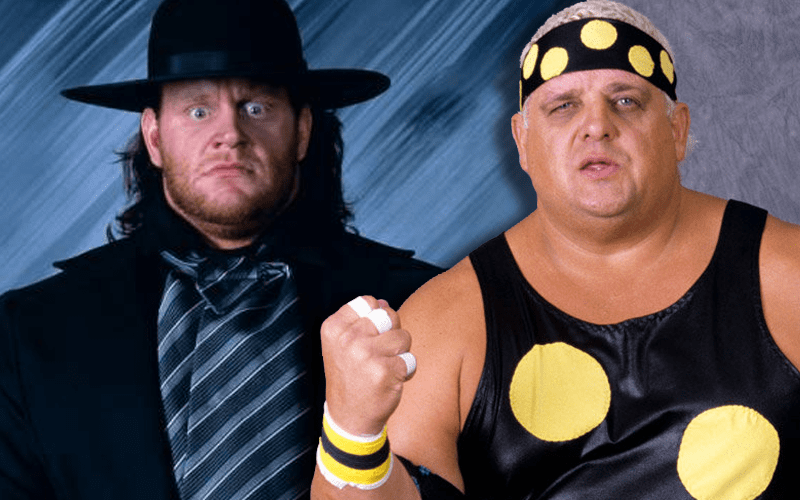 The Undertaker was pushed into the WWE spotlight with his 1990 Survivor Series debut. He took out the opposing team and that included the legendary Dusty Rhodes.

While speaking to The Broken Skull Sessions, Undertaker opened up about the fear he had before his WWE debut. He was certain that Vince McMahon would give him a wild gimmick that wouldn’t have longevity.

The Undertaker’s character has stood the test of time as he continually evolved. One man The Dead Man had to thank first as soon as that debut match was over happened to be The American Dream. He knew how much it meant for his career to get off on such a strong start.

“It didn’t feel right, because that’s an idol, but you’ve got the thumbs up and that’s the way it is. It’s the nature of the beast and I had to deal with that internally, but the first guy I saw backstage was Dusty Rhodes and I thanked him.”

“This is somebody that I grew up idolizing and watched so many matches of and there he is you’re in total control and you’re making him look like a jabroni, you know never that Dusty Rhodes would be a jabroni, but you get my analogy. You get what I’m saying there.”

“There was so much emotion coming at me, you know all the stuff that I’m getting. I’m getting ‘no one’s gonna pay money [to see you]’, ‘we don’t have anything for you,’ the eggman. It all comes full circle and you know that your time is coming.”

“I still had no idea where it was gonna go, but I knew I was further along at that moment. I knew that all the work and all the door slams, everything until that point had paid off and I was on my path. Like I said, I didn’t know where the path was going, but I knew I was in a better place than I was a month ago.”

The Undertaker has a lot of people to thank for his continued success in WWE. He certainly thanked plenty of people along the way. It’s interesting and very suiting that one of the first people The Phenom thanked was Dusty Rhodes because he gave Taker a lot of clout by eliminating the Grandson Of A Plumber.