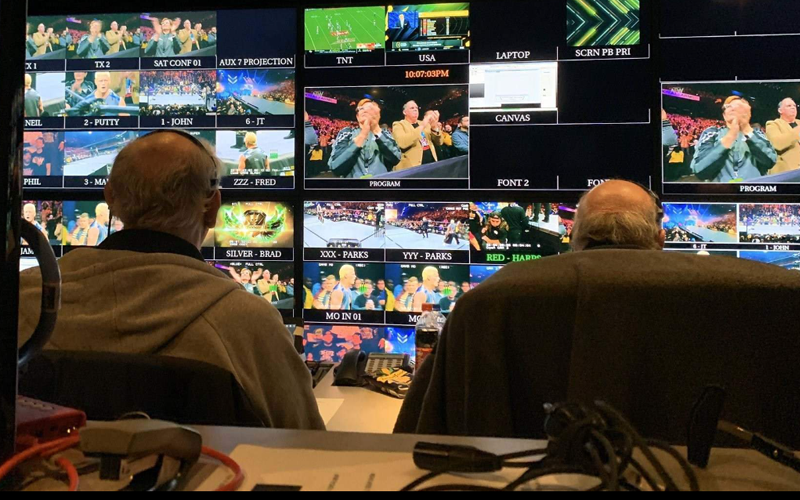 Cody Rhodes revealed during Starrcast IV that he doesn’t want NXT playing backstage during AEW Dynamite. They are aware of the other wrestling show, but All Elite Wrestling is concentrated on doing their own thing.

During the post Full Gear media scrum, Tony Khan was asked about NXT and whether it has ever changed how AEW books their show. He then said that they have never changed a thing that they have done on TNT due to WWE’s competitive program.

“We never once change a thing that we were doing. We just wanted to do the best show we can do because the limitations, you know we have two hours to please our fans and our advertisers. You have to please them both and you want to keep the show going for the sake of everyone.”

Later on, Tony Khan’s attention was called to the fact that an image of the AEW production truck was released. This included a screen that obviously said: “USA Network” right next to one that said: “TNT.”

Khan said he doesn’t know what they’re watching in the production truck during the show. There usually isn’t even a television with cable access backstage in the arena.

“That’s not my — I don’t know what they’re watching in the truck, I’m just talking about the Gorilla Position where I’m at. We don’t even have a TV that would have cable on it. We just have a feed of our own show and I have like the eight to ten cameras we choose to go from so, I don’t know I think sometimes they have like football [on in the truck] so I don’t know like when stuff’s going on during the day.”

“[As for what they’re watching] during the show, I can’t be there and be in Gorilla Position, so I can’t do both.”