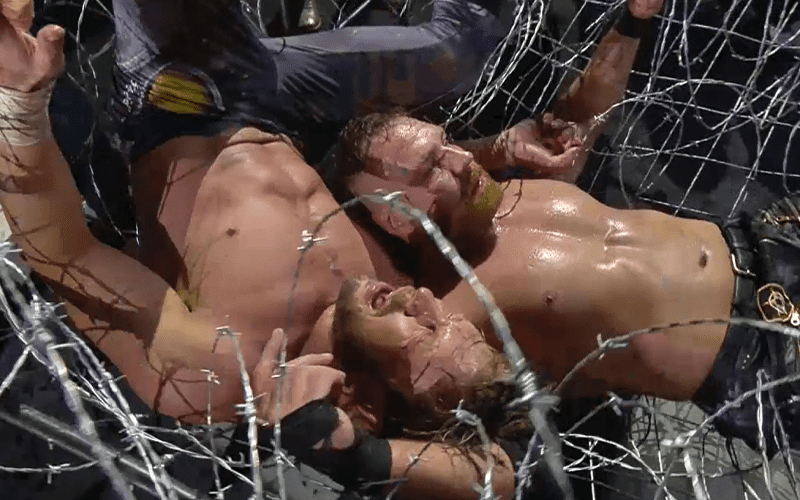 Kenny Omega and Jon Moxley closed out the Full Gear event in Baltimore and they brought plenty of “blood and guts.” There is a reason why Renee Young commented on this match while it was going on. She did not like seeing what happened to her husband.

Omega and Moxley started this match off stiff and that didn’t stop at all. They also got plenty of brutal toys involved. There was a barbed wire baseball bat, a barbed wire broom, chains, broken glass, mouse traps, an ice pick and of course, a barbed wire spiderweb.

There was a spot with broken glass where Moxley was locked in a sharpshooter and he was forced to crawl through broken glass to get free. It was almost like something out of Die Hard. That spot only took place after Omega sliced open Mox’s hand with a shard of glass and sent Moxley into the glass as well.

This match also featured with a sick bump where Mox and Omega both went through a barbed wire spiderweb off the stage. Then they fought on the floor where they went through a glass Full Gear sign on the set.

They were not done yet.

After fighting back to the ring, Moxley hit a Paradigm Shift before cutting away the canvas from the ring. The former Dean Ambrose disassembled the ring to make it even more dangerous. Omega countered Moxley and sent him flying with a back body drop. Then Omega hit Moxley with his own finisher on the exposed boards for a two count.

Omega missed a Phoenix Splash and hit nothing but the exposed ring for another near fall. Then Moxley nailed a Paradigm Shift on the exposed wood to secure the win.

It was a hard fought victory for Jon Moxley, but the match didn’t count in the official record books.