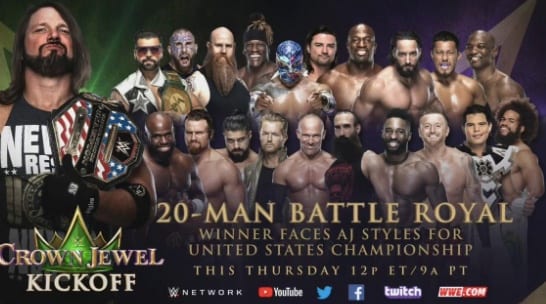 As seen on Sky Bet, the betting odds for the upcoming Battle Royal at WWE Crown Jewel have been released.

The show was already pretty stacked with a series of high profile matches having been announced across the last few weeks, but it seems as if WWE wants to try and fit as many people onto the card as they possibly can.

As such, we’ve been left with a 20-man Battle Royal with the winner going on to face AJ Styles for the United States Championship.

In terms of the betting odds, there are currently two joint favourites being priced at 3/1 – and those favourites are Cedric Alexander and Buddy Murphy. Humberto Carrillo follows closely behind at 4/1, with the top five being completed by Andrade 5/1 and Randy Orton 8/1.

Regardless of whether or not you think it’s wise or even great booking for WWE to put on a match like this on a card that’s already so stacked is kind of irrelevant at this stage, because if we have come to learn anything about WWE, it’s that they’re going to do what they want, when they want to do it.

Alexander and Murphy could both certainly benefit from the kind of rub which is going to come as a result of winning this, but of course, only one can get the job done.

If you want an outside bet, the following superstars are all priced at 50/1: Drake Maverick, Epico, Eric Young, Heath Slater, Konnor, No Way Jose, Primo & Victor. Go nuts.