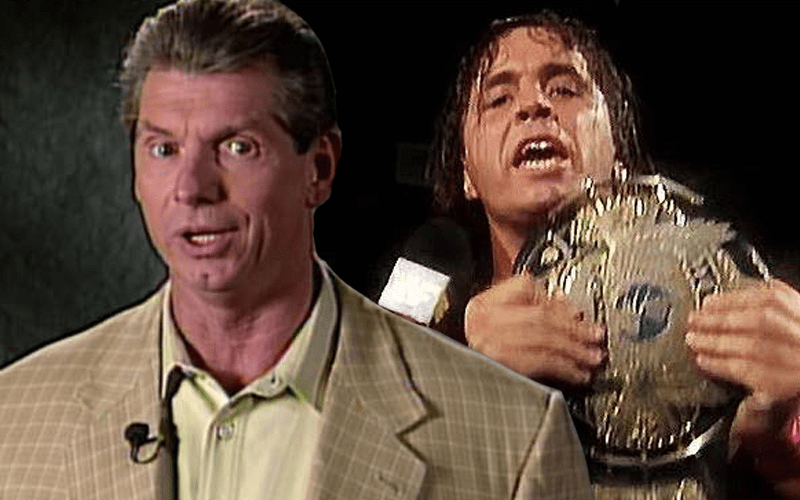 Bret Hart is revisiting history more often these days. He is taking part in Q&A’s and telling some old stories. He recently talked about how he was supposed to be the leader of the Kliq and that drummed up some controversy.

While speaking to Prime Time With Sean Mooney, Bret Hart discussed his WWE Title reigns, specifically his first one. He then transitioned into talking about how Vince McMahon lied to him after promising him a Bruno Sammartino like run.

“It was my understanding, as Vince had said to me from the day I won the title, he said, ‘You don’t have to worry about anything. We’re looking at you as a long-term champion. You’re going to be champion here for a long time. We’re thinking 6, maybe 7 years.’ Kind of going back to what Bruno did, where the champion holds the belt for a really long time, and that Hulk Hogan would have no bearing on anything that I was doing,” Hart said. “Those were the first lies that they told me. In the end, it was like, they lied to me. They gave me no warning for that at all.”

“I know people have a hard time understanding how it works; I’m not even sure how it works being champion, but I know that, basically, when you’re the champion, when you have the belt in your bag, and you’re the guy. You’re the highest paid guy on the card, and that was a big honor for me. I was making big plans for all the big main event money I was going to be making, and instead I got demoted, basically, and Hulk Hogan took my spot again.”

Bret Hart is a great storyteller, but it would be interesting to hear Vince McMahon’s side of this story. Hart is still a two-time WWE Hall Of Famer and nobody is taking anything away from him, but his run with the WWE Championship certainly wasn’t anything like Bruno Sammartino.