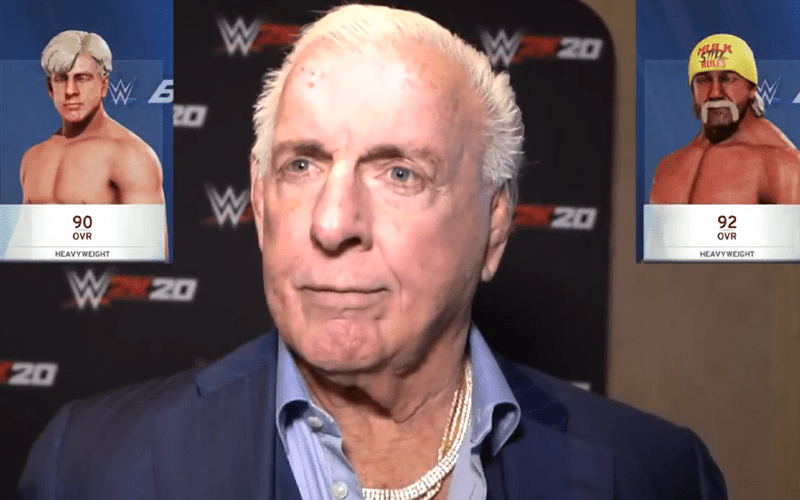 WWE 2K20 is coming out on October 22nd and every fan will have their favorite Superstar to play as. A Superstar’s rating can really factor into a player’s choice because everyone wants the best advantage over their opponent.

While appearing at a recent media event, WWE Superstars were asked to play a game of who’s higher or lower than them in the upcoming WWE video game. When it came to Ric Flair playing this game, he didn’t like the outcome much.

Flair’s rating is a 90 in the game and that’s respectable, but Hulk Hogan is a 92. Sting also has a higher rating with 91. The Nature Boy’s reply was one of disbelief.

“Wow… that’s because I’m older than these guys, you see. You’re giving them the bump because of the age difference.”

Flair also brought up how he was 60 and World Champion when comparing himself to Hulk Hogan. He also noted how popularity doesn’t mean someone is better.

Becky Lynch was happy to have higher ratings than any other female mentioned. She is on the cover of the game, after all.

Roman Reigns also felt like he’s better than he was last year so a 92 ratings isn’t appropriate anymore. He needs to be at a 93 or 94 now.

Adam Cole was also asked about how he ranked. Of course, the NXT Champion put himself over, but he’s not higher than his NXT mentors Triple H and Shawn Michaels.