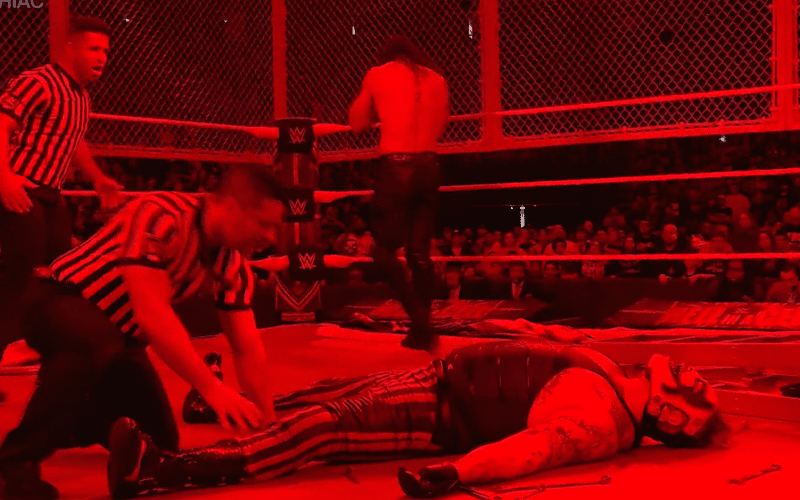 WWE Hell In A Cell came down to the main event as Bray Wyatt’s Fiend took on Seth Rollins. Fans expected a brutal encounter, but they really had no idea what they were in for.

They kept a sadistic red light on throughout this entire Hell In A Cell match. It provided a great visual addition to the already punishing events unfolding in the ring.

This match continued and was a crazy slew of brutality. Then Rollins hit 3 stomps, a Pedigree, and another stomp. The crowd was booing like crazy, but Bray kicked out at 1. Then Rollins hit 4 or 5 more stomps, but Wyatt kept getting up.

Rollins nailed Bray in the head with a chair, but he kicked out at 1. Then Rollins brought in a ladder and used it to smash a chair on Wyatt’s head, but he kicked out again. Finally, Rollins grabbed a toolbox from under the ring and he smashed it on top of the ladder sandwiched with a chair. He then put everything on top of The Fiend and got a sledgehammer from underneath the ring.

The crowd chanted “bullsh*t” loudly as the cell was raised up. EMTs rushed the ring and surrounded Wyatt as the crowd started chanting “AEW.”

Suddenly, The Fiend jumped up and latched on a Mandible Claw on Rollins. They moved to the outside of the ring and Bray Wyatt landed a Sister Abigail. The crowd chanted to restart the match and “AEW” even louder as Bray Wyatt hit another Sister Abigail on the exposed floor.

Then Wyatt latched on another Mandible Claw and Rollins started bleeding out of his mouth. Suddenly, the lights went down and Wyatt was gone. The crowd booed heavily as the pay-per-view came to a close.