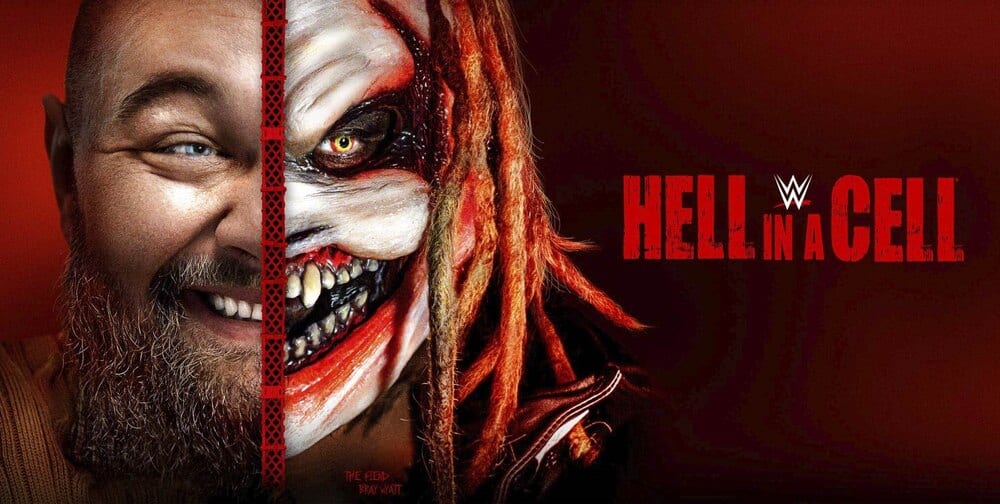 Welcome to Ringside News’ results for WWE Hell In A Cell 2019!

Tonight’s show comes to us after one of the biggest weeks in WWE history and there’s certainly a lot of positive buzz around the company. Which is why tonight’s PPV is quite an odd one. And that’s because, until an hour ago, there were only four announced matches for Hell In A Cell 2019.

The first of which is Seth Rollins Vs. ‘The Fiend’ Bray Wyatt inside Hell In A Cell. This has been the most exciting feud in the past month and thus far Rollins has been intimidated and emancipated by The Fiend. If Bray wins and becomes the Universal Champion, it will be a meteoric rise through the company since his return and after only one match. Chances are, something will happen to cause him to lose, like an Undertaker return or something. Regardless, this is the big match tonight and hopefully it lives up to the hype.

The second Hell In A Cell bout tonight is between Sasha Banks and Becky Lynch with the Raw Women’s Championship on the line. This is the second match between the ladies after the first finished in a no-contest. That can’t happen tonight however, as they’re locked inside the cell and will go to war. This match could and probably will be the best of the night.

The other two matches tonight previously announced were Daniel Bryan and Roman Reigns Vs. Erick Rowan and Luke Harper, and Charlotte Flair Vs. Bayley for the SmackDown Live Women’s Championship. Subsequently announced matches are Lacey Evans Vs. Natalya, The Viking Raiders with a mystery partner (obviously Cedric Alexander) Vs. The O.C., Chad Gable Vs. King Corbin, and Alexa Bliss & Nikki Cross Vs. The Kabuki Warriors.

So that’s out preview for the show. Hell In A Cell kicks-off at 6 PM with the pre-show, then the main card begins at 7 PM. Remember to download the Ringside News app, and follow us on Instagram and Twitter. Enjoy the show!

The Hell In A Cell Kick-Off Show begins with the panel of Charly Caruso, The Coach, Booker T, and Sam Roberts. The four of them run down the card for tonight’s show.

THE PANEL IS READY. #HIAC

We see a video highlighting the Sasha Banks/Becky Lynch feud. The panel discuss the bout and Sam Roberts says nobody has backed Becky into a corner the way Sasha has. Coach asks if Sasha has made Becky desperate and Booker says no, Lynch was always willing to walk through fire.

We get an interview from Alexa Bliss and Nikki Cross, in which they say the Kabuki Warriors have not done anything to earn a shot at their Tag Titles. Booker T disagrees and says Asuka is one of the best in the world, to which Asuka says they haven’t done anything as a team.

The first match of the night gets underway and Natalya takes Lacey to the mat with her wrestling ability. Nattie takes down Lacey again and applies a front face-lock. Lacey escapes and attempts to take control of the match but Natalya gets an Armbar locked. Lacey reaches the ropes to force the break.

Natalya goes for the Sharpshooter but Lacey reaches the ropes again. Lacet goes to the outside where she tosses Natalya and then shoves her into the steel steps. Evans gets Nattie back in the ring and applies a headlock. Nattie starts to fight out but gets knocked from the ring.

.@LaceyEvansWWE has had the upper hand the entire match, but not when it comes to the Sharpshooter… #HIAC pic.twitter.com/jx1SsVtb2d

Evans slams Nattie’s head into the apron. Evans gets her in the ring again and continues to keep Natalya down. She looks for the Sharpshooter but Natalya slaps her off. They have a short series of reversals but then Evans attempts the Sharpshooter again but gets knocked from the ring.

Natalya gets Lacey back inside but eats some clotheslines. Evans beats Natalya down and looks for her moonsault but nobody’s home! Natalya locks-in the Sharpshooter and Evans taps!

After the match Natalya clocked Evans with a right hand and left her lying.

We see a replay from SmackDown’s debut on Fox, with The Rock, Cain Velasquez, and Brock’s quick win over Kofi Kingston.

We go backstage for an interview with Ali, who is asked about his recent struggles. He says he aims to turn things around soon but up walks Randy Orton. The Viper mocks Ali, who challenges him to a match and Randy accepts.

There’s a video package highlighting the lenghty feud between Roman Reigns and Rowan, and now his tag partner, Daniel Bryan. We see Rowan walking backstage and Kayla Braxton stops him for an interview. Rowan interrupts her and says it doesn’t matter than Roman beat him, because this is a war, not a battle. He says Roman and Bryan think they’re tough but tonight it’s a tornado tag match and there is no rules for them to hide behind. And when they win they will get the respect they deserve.

“After we win, @LukeHarperWWE and I will get the respect that WE deserve.”

The panel discuss the match and Booker T says that Daniel Bryan can’t be trusted, and that Rowan and Harper are hungry for success. Sam Roberts says he agrees, that both men have a huge opportunity tonight to make a name for themselves.

The panel talk a little about Tyson Fury and Braun Strowman, and announce that Fury will be live on Raw this Monday night with a microphone!

The final match discussed is the main event for the Universal Championship match. The panel don’t have much hope for Seth Rollins, citing his obvious fear of The Fiend has a huge hindrance, but mentioning he usually finds a way to overcome.

And that’s it for the Kick-Off Show! We’re going live to the show!