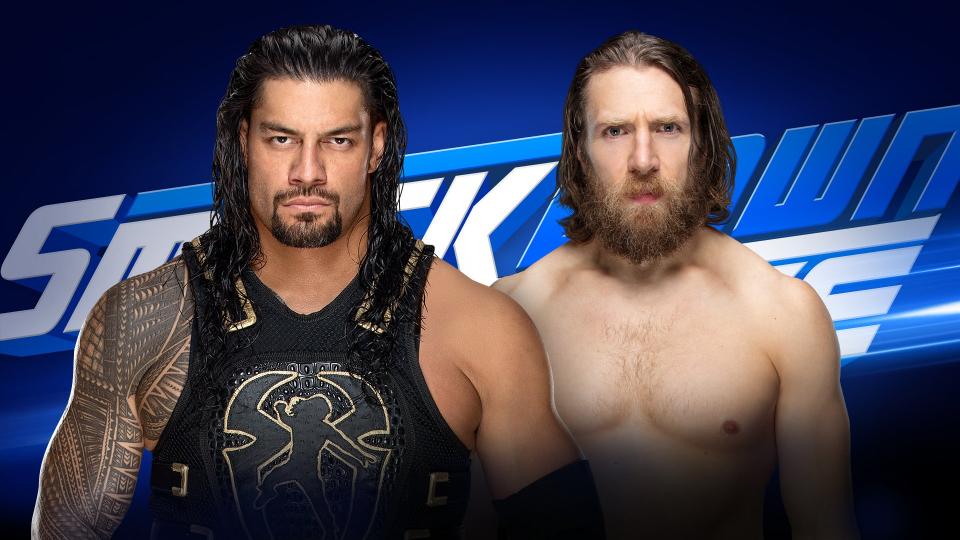 Daniel Bryan wants to meet with Roman Reigns to clear the air it looks like that’s exactly what is going to happen between those two.

Meanwhile, Shane McMahon also wants to put matters to rest with Kevin Owens. The former Universal Champion has a $25 million wrongful termination lawsuit against Shane that everyone probably wants to get out of the way.

Kofi Kingston will face Brock Lesnar on SmackDown Live next week. We’re unsure if this will mean a new champion will be crowned on Fox, but we will hear what Kofi has to say in a sit-down interview.

Also, Charlotte Flair will team with Carmella this week to take on Bayley and Sasha Banks in a tag team match.

Erick Rowan came down prepared to make a statement to the WWE Universe. Rowan said destroying Daniel Bryan last week was a work of art and he was getting plenty of heat and “you suck” chants.

He wanted respect and said that fans see him as less than human. He said things have changed now and what matters now is whether you can destroy and dominate. He said Roman and Daniel Bryan knows he’s right and they’re afraid.

Then Daniel Bryan’s music hit and he got a face pop. Bryan walked out in full gear and said if Rowan wants respect then “fight me right now.”

Rowan took the action to the outside and took control over Daniel Bryan. Then they returned to the ring where Rowan slapped on a submission hold to keep Bryan down for a bit.

Bryan tried to mount a comeback, but Rowan took him down with a spinning kick. Rowan continued his assault which included Bryan nearly making it back to the ring before the referee’s 10 count.

Eventually, Bryan cut Rowan down a bit with a chopblock and then he wrapped his leg around the ring post a couple of times. Bryan hit a dropkick to the leg and went back into the ring to continue working on Rowan with another set of dropkicks. Rowan caught Bryan’s third running dropkick and slammed him down for a two count.

Rowan applied a bearhug at that point to wear Bryan down. Then Rowan hit a powerbomb for a two count.

When we came back from commercial, Erick Rowan was still in complete control. Then Bryan pulled down the top rope and sent Rowan outside. Rowan caught Bryan’s suicide dive and Daniel sent him into the ring post.

Bryan hit a missile dropkick when they went back inside and he hyped himself up before nailing some Yes Kicks.

Rowan caught Bryan on a dive, but Daniel transioned it from a guillotine into a LeBell Lock. Suddenly Harper was there and Bryan hit a suicide dive.

Harper hit him and tossed him back in where Rowan hit an Iron Claw Slam while Bryan’s foot was wrapped in the ropes. That was weird. Then he hit another one for a three count.

After the match, Rowan and Harper went to clean off the announce table and then Roman Reigns came out for the save. Roman hit a Superman Punch and a drive by, but the numbers game caught up with him. They were about to put Roman through the table, but Bryan woke up.

Daniel took out Harper with a running knee and then Rowan was trying for an Iron Claw Slam, but Roman speared Erick Rowan. Daniel Bryan grabbed the mic and asked if people wanted to see himself and Roman kick Rowan and Harper’s “disrespectful asses?” Then the fans popped.

Kingston tried to get Michael Cole to be more enthusiastic, but it didn’t work.

Kofi was asked why he accepted Brock Lesnar’s challenge. He said that he’s a fighting champion and there’s no way to prepare for Lesnar. Kofi’s on the top of his game and he’s defeated a lot of top guys, so he feels pretty good.

He always feels pressure, but he also feels like this is an amazing opportunity for WWE and Fox so he wants to face Lesnar. He said that people think Lesnar is going to come in and have his way with him and walk out as champion, but he’s not going to let it go down that easily.

Chad Gable said that Corbin said that he’ll always come up short. That’s a short joke, but his run in the KOTR tournament was no joke. Suddenly, Mike Kanellis came out to cut him off.

Kanellis said he’s sorry to cut him short, but he’s out here to prove to his pregnant wife that size does matter.

Gable hit a belly to belly and a rolling German suplex before applying an ankle lock. It was literally over as fast as it took to read this.

Suddenly, Elias was on the screen calling Gable “shorty.” Then he sang a little song about how Gable is an underdog, but if it were up to Elias, Gable would be fired. That was it.

Charlotte Flair was looking for Charlotte Flair and R-Truth said he hasn’t seen her. Mella came out and said that it’s okay. Then they talked about their tag team match tonight.