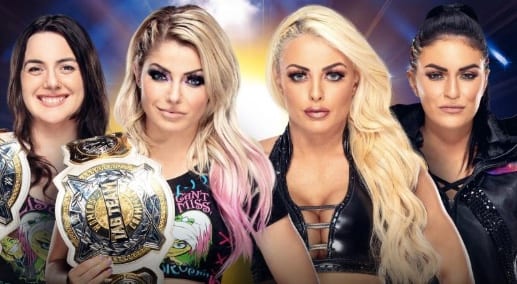 As seen on Sky Bet, the betting odds for Alexa Bliss & Nikki Cross vs Sonya Deville & Mandy Rose at WWE Clash of Champions have been released.

The Women’s Tag Team Championships haven’t exactly been at the heart of WWE programming over the course of the last few months, and to be honest, nobody was really expecting that to be the case when they were introduced at the start of the year.

However, Bliss & Cross have done a decent job of raising the prestige of the belts – even though that opinion is likely to be a somewhat questionable one in the eyes of many fans.

In terms of the betting odds, Alexa Bliss and Nikki Cross are currently priced as 2/7 favourites to retain their belts in Charlotte. Rose and Deville, who have been chasing the gold for a while now, are 5/2 underdogs to pull off the title win.

In the midst of all this there has been a lot of speculation as to when Alexa Bliss could turn on Nikki Cross, which tends to be the general expectation for the direction this feud is going in. However, we tend to believe that WWE aren’t going to pull the trigger on that.

Instead, we’re picturing a scenario in which this duo stays together for a good long while – potentially even all the way up until WrestleMania. Then, from that point on, you could always have Nikki be the one to turn on Alexa who has been blossoming nicely as a babyface lately.