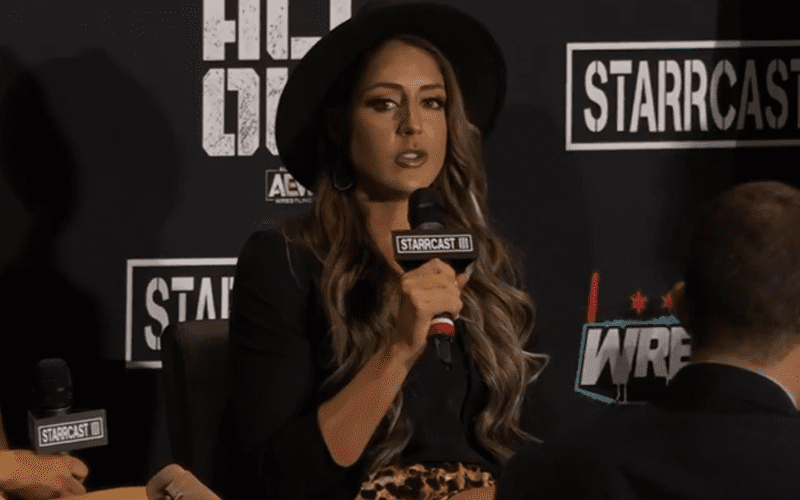 Britt Baker is set to make big name for herself in AEW. She is also trying to get people to stop knowing her only by who she is dating.

While speaking at the Women Of AEW panel at Starrcast III, Baker said this is her time. She is dating NXT’s Adam Cole and has been for quite some time, but that shouldn’t define her.

Britt Baker doesn’t have a problem with people knowing that she is dating Cole, but she has also worked very hard to get to a position where she’s known by so much more.

“For the longest time I think people only knew me as Adam Cole’s girlfriend. As much as I love him to death and I will never be angry or ashamed of someone who says: ‘Oh that Britt Baker, she’s Adam Cole’s girlfriend,’ but now with AEW and my position here and the fact that I’m a dentist and a wrestler and the first woman signed I feel like now it’s finally my time where I’m kinda veering away from that title.”

“For me it’s so rewarding — and again, I’m never angry or mad when someone goes, ‘Oh, that’s Adam Cole’s girlfriend.’ I am my own person too. So I feel like this is my time.”

Oddly enough, this is also Adam Cole’s time as he and the NXT roster will be battling Baker and the rest of AEW in the Wednesday Night Wars. Britt Baker had to do a lot for people to think of her as more than just Adam Cole’s girlfriend, but now it really is her time to make a name for herself.