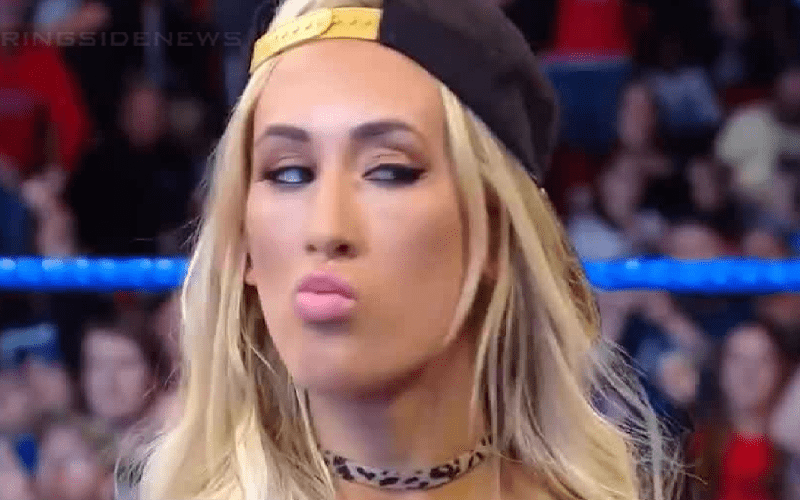 SmackDown is going to have a big twentieth anniversary celebration when they debut on Fox this October. The company is also capitalizing on this occasion by releasing a two-DVD set celebrating two decades of the blue brand’s history.

Carmella was featured on the cover of this DVD set, but not everyone could make the front. One fan was especially upset that Kurt Angle wasn’t featured so he sent out a fiery tweet to make his opinion known.

“Not being funny, but how you gonna go ahead and put out a SmackDown 20th Anniversary DVD cover without @RealKurtAngle anywhere to be seen? That guy WAS SmackDown for the longest time. Roman Reigns (spent the majority of his career on RAW)? Carmella?! Come on. Huge oversight.”

Carmella obviously saw this tweet and she didn’t really appreciate the way this fan was coming at her. So she replied saying to let her have this small win. After all, she’s never been on the cover of “anything” before.

I’ve never been on the cover of anything. Let me have this small victory and fall back, Dan.

WWE has some big plans for their Fox move on October 4th. We’ll have to wait and see if The Rock will show up because he’s featured front and center on the cover of the DVD release too.

Carmella is very likely to be in LA for the big SmackDown Fox debut though and she’s happy about being on the cover of the DVD no matter what some fans might like to say about her inclusion.