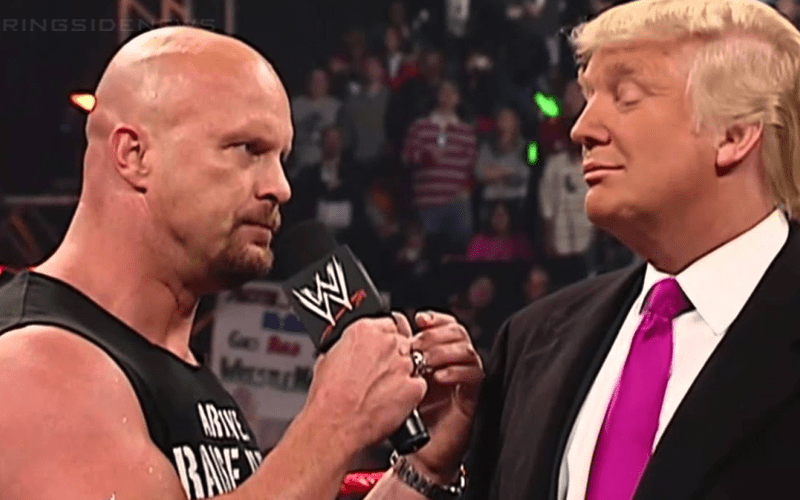 Donald Trump was a part of a marquee match at WrestleMania 23, but he didn’t actually wrestle. Instead, he had Bobby Lashley represent him in a match against Umaga. Vince McMahon was backing the Samoan and the winner would get to shave the loser’s head. Of course, the loser was Vince McMahon.

Steve Austin got to hit the future POTUS with a Stone Cold Stunner at the 23rd annual show of shows. It was all in good fun, and as The Rattlesnake spoke to the KFC Show about his experience he had nothing but fond memories of the program.

Man I tell you what. No but here’s how that went down. I was going to be the referee and it was team versus team and whoever’s team lost. The head of that team which was Vince[McMahon] and Trump were gonna have to get their head shaved. Of course you knew Donald Trump wasn’t going to get his head shaved cuz it’s pro wrestling.

Vince was gonna get shaved. So all of a sudden Vince comes to me and straight up there this is the way it happened. We’re in the back area. 90,000 people out there Ford Field and he goes “Steve come over here. I’m gonna see if I can get Trump take a stunner. I said, “Aw bull shit”. I said, ” You think he will?” He goes “I know Donald he’ll he’ll do it.” So anyways he goes “Donald, Come over here” and he goes, “Steve this is Donald Trump.” “Hey, Mr. Trump. How are you doing?” And I met him. He goes “Listen I was thinking about after everything is all said and done. Steve would hit you with his finished move.” “Well what is it.” “Well it’s called a stunner and it kind of goes like this.”

And Donald Trump’s right hand guy all of a sudden goes, “Oh no no no no you don’t need to do that there’s a million reasons why you shouldn’t do that. And here’s why.” But Donald said, he looked at Vince, and he goes “You think it’ll help the show?” He goes “Oh Donald they’ll go crazy.” So Donald Trump was was man enough to go out there and now we botched it. It was the slickest stunner that I ever delivered but I give him credit. Just from it. Whatever anyone’s opinion is that he did was cool enough and in a Showtime event like that event to go out there and be a part of the show and make people happy. I dug it.

It’s not likely that Donald Trump will be taking any more bumps in the ring. After all, that match took place over a dozen years ago. Austin seemed to really enjoy himself though.

WWE is apparently still trying to convince The White House to let the President Of The USA stop by SmackDown once they are on Fox, but that’s another story.