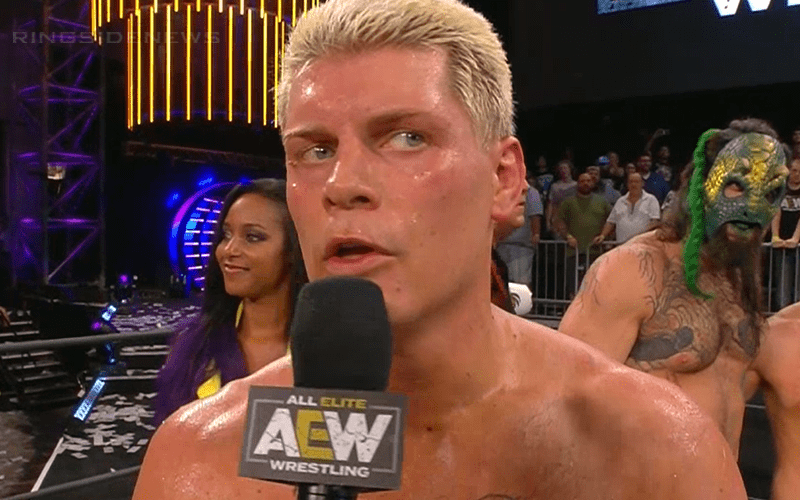 Cody Rhodes recently reacted to some comments that CM Punk made about his dealings with All Elite Wrestling. Punk said that they had offered him a contract via text message and it’s hard to know how to reply to The Elite when they communicate with him at all. Because The Second City Savior says that they blow everything out of proportion.

Rhodes made a remark implying that CM Punk was misquotes with his remarks about AEW. However, that is not the case. Marc Raimondi commented back saying that he assures people that CM Punk was not misquoted because he wrote the article.

Dave Meltzer talked about this during Wrestling Observer Radio where he said that he received a call from “someone in the media” who was apparently mainstream and could have had some pull. He advised Meltzer to warn Cody that he doesn’t want to start saying things like that.

“A major reported, not a wrestling reporter contacted me today and it was almost like, ‘tell Cody don’t do this because if the media thinks that you’re gonna be one of those guys who says misquote it’s not good for a rising organization to do that’ and Cody doesn’t know better.”

“It’s not like Cody knows Marc, but it’s basically like for a new organization and everything like that that wants mainstream coverage you know it’s probably not good to be one of those people who mainstream people are going ‘oh this is one of those guys who claims misquote.’ Again, all of this is a learning experience.”

“It did actually happen that a pretty major reporter who saw the way the whole thing went down and was just like — wasn’t mad at Cody — it was just like ‘they need media lessons because they need to expand and have that mainstream media.”

It was also said that if Cody Rhodes and AEW can position themselves as “underdogs” then they could likely get some very favorable media coverage as well.

AEW needs the media to be on their side and to kick things off by saying that the media isn’t representing them well and misquoting things is not the way to go.

Meltzer went on to say that the AEW Executive Vice Presidents could certainly use some media training to learn how to deal with this kind of public job. Because everything they say at this point goes to reflect on the company.

We’ll just have to wait and see if CM Punk does end up with AEW. After all, we’ve all been worked by Punk before. It is also important to remember that Cody Rhodes might consider himself as a wrestler first, but people outside of the pro wrestling bubble are seeing him as an executive of a brand new company.