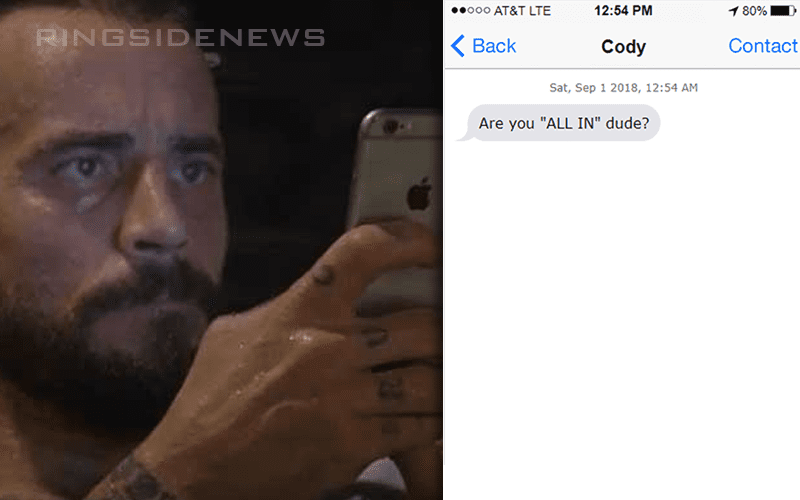 All Elite Wrestling will be debuting on TNT starting on October 2nd. It would certainly be nice to have CM Punk on the AEW roster by the time their big debut comes around, but that obviously hasn’t happened yet.

While speaking to ESPN, CM Punk was able to confirm that he did recently get a text message from Cody Rhodes, however, he never knows how to respond to a message from one of The Elite at this point. Because everything he says seems to get blown out of proportion.

After all “texting offers” isn’t the way that CM Punk does business. So if they plan on getting him, then a presentation and something much more formal might need to be arranged.

The last thing I got — I got a text from Cody [Rhodes]. And again, I almost don’t even know how to reply to them sometimes, because if I reply, they do interviews and are like, “Oh yeah, I just talked to Punk.” I’m kind of damned if I do, damned if I don’t. I always think if somebody wants to do business with me, they can come talk to me. Texting offers isn’t really a way to do good business, at least.

Punk was asked if Cody Rhodes actually sent him an offer via text message. To that, the Second City Savior had to confirm that an offer did eventually come through for him through his phone.

It was texted through three people and an offer came in through text. This is like a month ago, maybe.

I think it was just a general offer. I never could have done the last one in Vegas [Double or Nothing], because I was in California for CFFC.

It seems like All Elite Wrestling is still trying hard to get CM Punk to sign with them and it hasn’t happened yet. It might not take place at all if AEW keeps doing their business through text message.

As he previously stated, fans are coming up with a lot of hopeful conclusions in that regard, but it hasn’t happened yet. It is not for lack of trying though because AEW obviously wants CM Punk to come aboard for this ride.

It is also important to remember the mission of AEW and all of the great performers that they need to introduce to a national audience. Having CM Punk around might help bring in some viewers, but as Chris Jericho stated AEW doesn’t really need CM Punk. That doesn’t change the fact that they really want him.