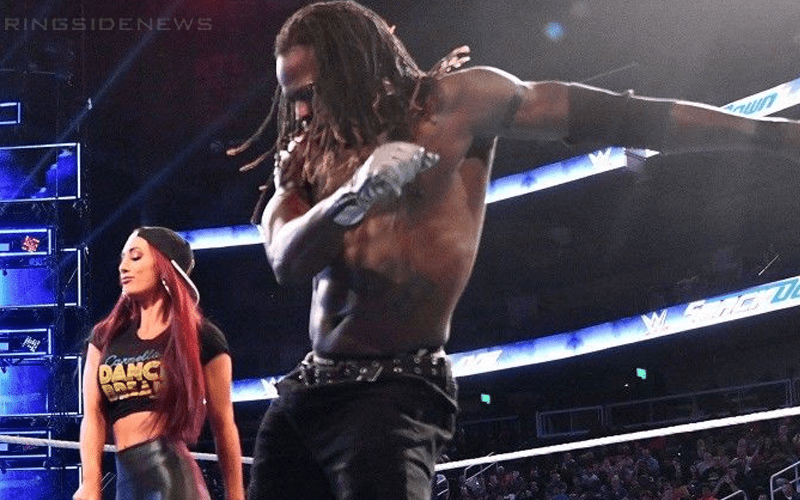 R-Truth has a few tools up his sleeves that he can use to get a crowd going. One favorite was the seven second dance breaks. Truth and Carmella got plenty of people dancing and went viral with their dance breaks.

During E&C’s Pod Of Awesomeness, R-Truth brought up how he was astounded that people are doing seven second dance breaks on the indies now. It really has taken on a life of his own. This is why he wrote a song called “Dance Break” before anyone else could.

The recurring segment started as many do in WWE. Someone just pitched it out there and a Superstar took the ball and ran with it. In this instance it was R-Truth and he along with Carmella really made the most of their seven second dance breaks.

“I remember when we was doing the Truth TV, one of the writers said ‘you should stop talking and say ‘I think it’s five for a seven second dance break’ and then after you dance they want you to start back talking like you didn’t even stop. And I started laughing and I said, ‘Really?’ They said: ‘Yeah.'”

“I said, ‘I’m gonna do it!’ They asked if I liked that I’m like ‘Hell yeah I like that!’ That’s where dance breaks came from.”

R-Truth doesn’t have much time for dancing anymore as he keeps running with the WWE 24/7 Title, or running after it now with Drake Maverick as champion. You never know when R-Truth might pop up to win it back.

You also never know when Truth will call for another seven second dance break to wake up the crowd once again. We’re including a video of the world’s largest seven second dance break from WrestleMania where he and Carmella came out just before the main event. Please keep in mind how unbelievably tired everyone in the crowd was after sitting through so many hours of wrestling that weekend.