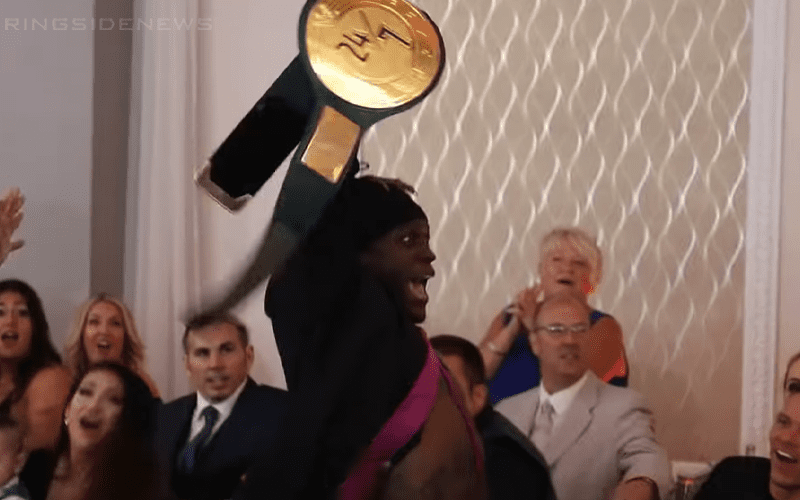 R-Truth is an eight-time WWE 24/7 Champion, but one of the most famous ways he captured the title was at Drake Maverick’s wedding. Truth pounced on the recently wedded Maverick and rolled Drake up for a schoolboy pin and the win. The entire time R-Truth was wearing a sport coat with no shirt underneath.

While speaking to E&C’s Pod Of Awesomeness, both Edge and Christian applauded R-Truth’s performance at Drake Maverick’s wedding. Then Truth went on to reveal that the original plan for crashing Drake Maverick’s big day involved Truth wearing a wedding dress.

Vince McMahon has been chastised a lot by some of his creative decisions as of late, but he had a pretty good reason for nixing the dress.

“Let me tell you about that man, that was Sarah’s idea, man. Oh my god, that was so funny, Sarah Stocks she was there. Because at first I was gonna do the wedding dress and Vince said ‘No, no wedding dress, that sounds like he’s trying to be funny. Let Truth just be funny, let him be himself.'”

“And when he said that I said, ‘alright cool, I see the point, no wedding dress’ and Sarah said, ‘what do you have on?’ I said ‘I got some black jeans.’ She said, well I’ve got a suit coat, we’ve ordered a suit coat for you’ and she said ‘how about you go with no shirt on?'”

“And I laughed and I went ‘everyone is dressed like they’re in a wedding,’ she said, ‘Yeah.’ Then I said, ‘Just because you said that I’m gonna wear it. That was all her.”

The wedding was a great success thanks to some quick thinking after Vince McMahon rejected their initial idea. That is, it went well for everyone except for Drake Maverick as he lost the love of his life: the WWE 24/7 Title. Maverick is currently the 24/7 Champion again, but only time will tell how long he will be able to hold onto that title while making his wife’s honeymoon a misery.