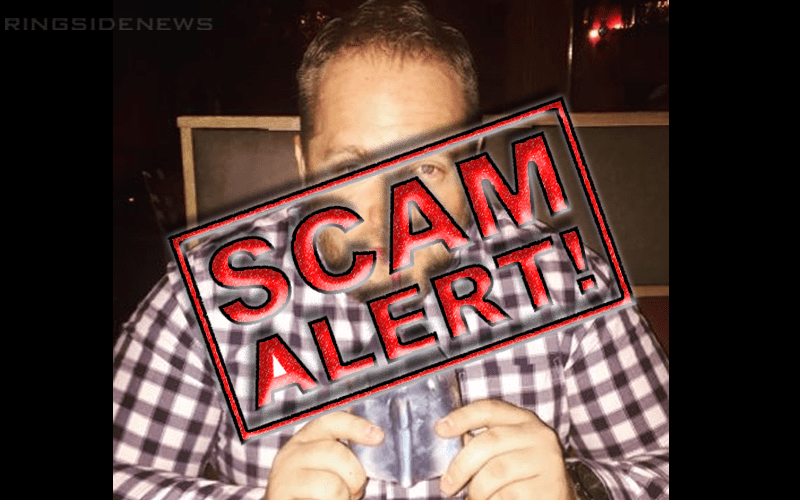 There are a lot of scams going on within the confines of the internet. One scam was recently outed in the IWC and it was truly unfortunate to hear about. Because Jerry ‘The King” Lawler’s former podcasting co-host Glenn Moore was recently called out for scamming fans out of thousands of dollars.

We previously reported on a bunch of fans have stories about how Glenn Moore scammed them out of cash while promising rare Jerry Lawler merchandise. Now even more victims have started to come forward.

Bodyslam.net has received even more victim accounts about what happened in their experience with Glenn Moore’s online scam.

One fan explained that even in times when money was refunded the cash did not find its way back to them because apparently, Moore didn’t have the funds to reimburse them.

All the victims have similar stories. I’m no different. I waited 9 months for mine custom oil painting. He refunded me $1500 twice only to have it bounce both times. I’m in an additional $750 in court costs and legal fees, so my all in at this point is $2250. I don’t understand how JL could not have seen the court letters, the cert letters that were mailed to his house – after Glenn was fired. This shouldn’t be such a surprise to him in my opinion. I think the surprise was being caught off guard so quick by so many people. But, whatever the case may be, he needs to do right and settle up with victims immediately and not screw around. He can take all the time he needs to sue/prosecute Glenn. That’s not a concern for the victimized fans. Make good with the fans, restore hope and credibility with fan base and move forward. Dragging your feet on this will only make the situation get worse.

He got served papers – whether he knows it or not. There’s a court date coming up. Lawler claims he doesn’t know anything about this.

The lawyers had been dealing with Glenn for months. He had them convinced I would get my money back. They waited and waited. Excuse after excuse. No money. Finally they cut ties with Glenn and went after JL. But he never replied to the lawyers.

Here’s the baffling part which I don’t get… in the interview Jerry says he parted ways in Dec with Glenn. That means he was fired. Where did all my cert mails and legal letters go to that were delivered to his house in March and May. Initially JL told reporter that Glenn lived in the house and must have intercepted mail. Well that makes no logical sense. You don’t let your ex agent live in your house if you fired him. Then he said that Glenn controlled his twitter and FB account for a long time. I can’t imagine Lauren, being younger and more tech savvy, being ok with this arrangement. So, there are lots of holes in the story that need to be filed in. But we are making progress.

Another fan gave an account of their experience with Glenn Moore as well. Needless to say, this is not a very happy time for them as they are still out whatever money Moore was able to convince them to send in.

This particular fan was pulled in with an advertisement on the Dinner With The King podcast’s Twitter account offering to give them a shout-out on the show.

So I took him up on his offer to have Jerry Lawler give me a shout out on my Instagram account for a future episode of his podcast.

I thought to myself “How cool would be it to have The King do that?” I took the opportunity for this great honor.

Glenn was being pushy, but I didn’t think much of it at the time because that’s how some guys do business with limited time deals and I made the stupid decision to send the amount of money I won’t disclose as Friends and Family at his advice for both of us to save money. It seemed like a good idea at the time and I thought I could trust him due to his connection to Mr. Lawler.

And as you can see in the following back and forth business conversation we had on Twitter DM, I tried to be patient. I tried to give him the benefit of the doubt before I slowly realized I had also been robbed by Glenn Moore:

He also provided screenshots from a DM conversation that he had with Moore through the Dinner With The King Twitter account. You can find those shots below:

This fan learned their lesson the hard way to always send PayPal through the “goods and services” option because then their payment would have been protected. Because there is no protection provided if PayPal thinks you are sending cash to friends or family.

And that was the last conversation I had with him. I realized all hope was gone when no new episodes of Dinner With The King had been uploaded.

After Mr. Lawler revealed his falling out, I e-mailed Mr. Moore to return the funds politely as a final chance for him with me, but there was no response which is what made me come forward with my story to you guys.

Moral of the story: ALWAYS send PayPal payments as good and services! You won’t regret it later.

If you thought this was the last account of being scammed through this operation that Glenn Moore had set up, then you would be wrong. Because yet another victim reached out to Bodyslam to provide their account of being taken for cash while being promised Lawler merchandise.

2 months ago I bought in to the Patronage page for the pod cast. As of a couple of days ago it was still up. I talked to Glenn about it. It was the $155 a month level to host a pod cast.

He tried to sell me the same shirts

Well just for just what is listed as what is listed on the pateron page is going to be lots of people. Then the art work and shirts is a whole different ball game

Oh sure. Luckily I smelled something fishy about the shirts and was lucky enough to cancel before I was charged the 3rd month

One last victim responded to the news breaking that this was a scam. They recounted giving up $130 to Glenn Moore and also provided screenshots of a conversation that he had through the Dinner With The King twitter account.

Paid $130 on May 31st for 2 of his shirts that were supposed to be signed by Jerry. Never received them and every single time I would send a message to Glenn about it, he gave me excuse after excuse.

Here are the screenshots he provided as evidence of their interaction.

Judging by the fact that this story is relatively new and so many fans have already come forward to say that they were victimized could mean a lot more fans are ready to come out of the woodwork. At this point, it looks like it’s pretty hard to deny that Glenn Moore pulled a huge one over on the IWC, but he’s obviously not going to get away with it anymore.

It’s just very unfortunate that so many people had to get taken before everyone figured out his operation.