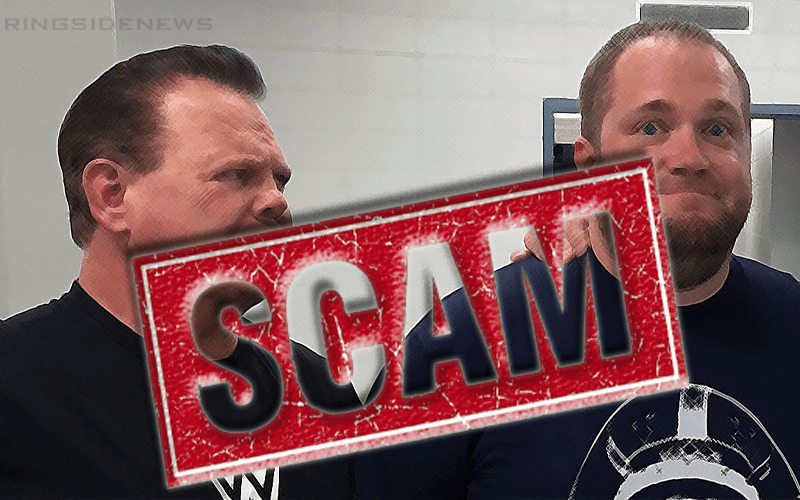 Jerry Lawler’s Dinner With The King podcast was a great source of history and entertainment, however, the podcast was halted very suddenly. Because one of the podcast’s hosts turned out to allegedly be a scam artist (spoiler: it’s not Jerry Lawler).

When asked where his podcast went, Lawler made mention that his co-host Glenn Moore did some “terrible things” during a recent radio show appearance, but he didn’t say much more. It turns out that Moore scammed fans out of a ton of money by using his relationship with The King of Memphis Wrestling.

Glenn Moore has gone totally radio silent and Bodyslam.net has uncovered some serious scams and overall sketchiness that Moore is said to have committed by bilking fans out of cash. He promised them artwork and t-shirts, but nothing was ever sent out.

Bodyslam.net reached out to one of Glen Moore’s alleged victims. They had a lot to say that dove into Moore’s alleged history of scamming people and being an overall dishonest human being.

He has quite a criminal record virtually all money related

He was hired by http://cleveland.com as a reporter despite not having virtually any education past high school

He lost his job there for being a plagiarist

A co-worker loaned him $800 and never paid her back

He had the inside track of being the Cavs beat writer for http://Cleveland.com the year LBJ came back, He plagiarized his story from the Indians game the night LBJ announced he was coming back to Cleveland & got terminated the Monday after. That game was on a Friday in Saturday’s paper

When other writers read when Glenn wrote in his article about what was talked about before the game they knew Glenn wasn’t there to cover that. The Baseball Writers of America filed a complaint about his plagiarizing. He claimed he was there but was proven he wasn’t

They were also provided with screenshots of a conversation that is said to have taken place with Glenn Moore promising merchandise. As you can see, he was using the official Dinner With The King Twitter account.

This was a pretty detailed conversation that ended with a bunch of excuses and no merchandise or returned money.

Another alleged victim of this scam operation reached out as well. They had a similar story that is quite tragic to hear.

Fans trust people in these positions with a lot and it is horrible to take such advantage of anyone, especially a fellow wrestling fan.

Yes apparently he sent multiple people the same message (I’ll send the whole conversation) about buying 2 signed Jerry lawler shirts, at the time I received this message I had just started back to work after being out sick 3 full months which I told him that I’m the message. But like a idiot I decided to give my last $150 because I’m a Jerry Lawler fan. I believe I paid him on 5/12 or so and waited weeks and weeks then asked about the shirts he came up with some excuse and told me he would send them out that following Monday so I waited weeks and weeks before messaging him again and he came up with more and excuse. Then I seen someone posted that radio interview of lawler saying he stopped doing the podcast with him because he can’t be trust that’s when I finally knew I had been scammed then seeing all the other people he scammed on twitter just confirmed it. Then seen a lady posted up screenshots of the same message about the shirts and she had paid him for the shirts on 5/31 when I had paid him 5/12 for the same shirts

We will keep you posted on this story if there are any new developments. This situation is very unfortunate all around, but apparently we’re not talking about just a couple of victims.