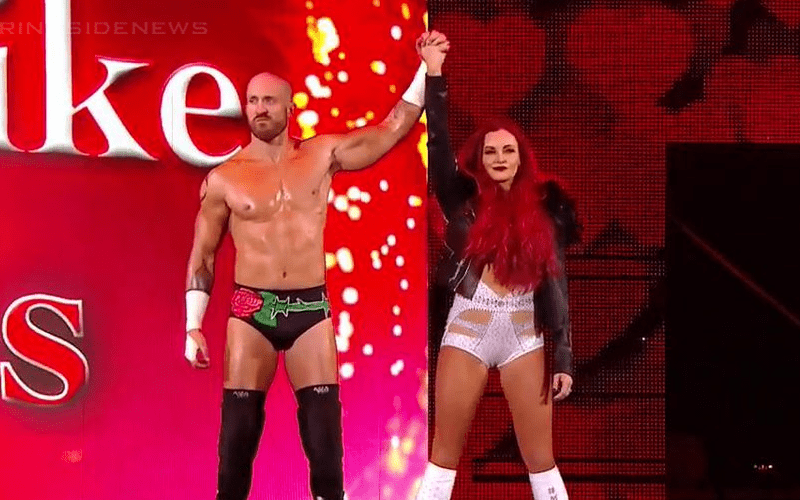 Mike Kanellis and Maria Kanellis came into WWE at a strange time for them. It wasn’t long before they were sent quickly down the card and then after that, they disappeared. Maria had their daughter and then came back as Mike had gotten himself back in incredible shape. Now that they’ve signed a five-year contract it appears they’re getting a bigger push.

Mike and Maria Kanellis showed up on RAW this week. Maria did all of the talking, but she went right for Becky Lynch and Seth Rollins to shoot straight for the top.

Maria said the only reason why Seth is the Universal Champion is because he hasn’t faced her husband. This resulted in a mixed-tag team match between the four of them.

Maria Kanellis finally got her chance to wrestle again on WWE television which was great to see. It also appears that Mike Kanellis quitting 205 Live last week might have opened the door for this new role on RAW.

The Kanellises didn’t fair too well against Seth and Becky. Then Maria was forced to take the tag and she jumped out of the ring with Becky Lynch chasing her.

Maria Kanellis took the microphone and blamed Mike for not protecting her. Then Becky was about to destroy her and Maria yelled “I’m pregnant!” So Becky left her alone. Mike didn’t know what to do and he was shocked. Maria Kanellis turned super heel and said she doubted that he could even get her pregnant because he’s not man enough.

Then later on, Maria said that the only man in the ring during their mixed-tag match was The Man. Then Maria dropped a huge bomb when she said that maybe she’ll ask Becky Lynch to get her pregnant next time.

So Maria Kanellis might be pregnant in the storyline, or perhaps this could just be something her character is using to get out of a beating from Becky Lynch.

Either way, this has Paul Heyman’s fingerprints all over it. We’ll just see how this storyline turns out in the end, but it’s probably not the last we’ve seen of Mike and Maria Kanellis.