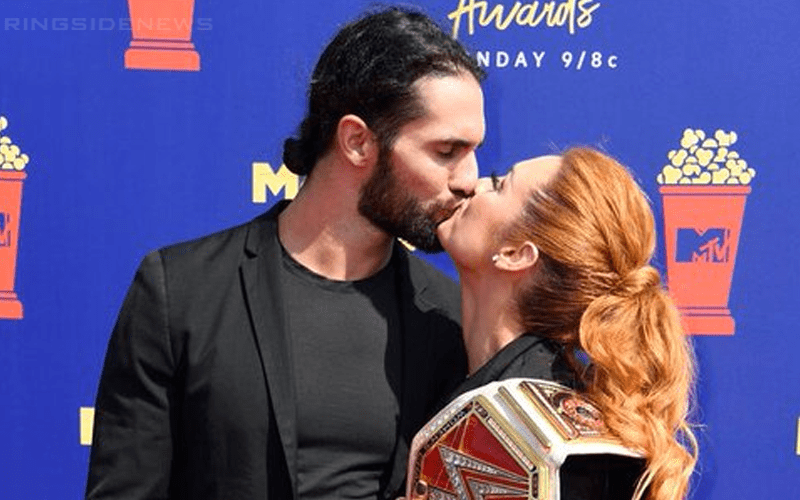 Seth Rollins and Becky Lynch are WWE’s new power couple. The company is going to probably keep using them for a very long time too.

This new coupling on-screen actually came well after the two were together. They are now reportedly sharing a home and are very committed and happy. Needless to say, this isn’t a brand new relationship even though they tried to keep it hidden for a little bit.

While speaking to Sports Illustrated, Seth Rollins revealed that WWE decided to “strike while the iron’s hot” in regards to putting them on television as a couple. He said that in a year the idea might not be as cool of an idea “that’s assuming I’m lucky enough enough to keep her for a full year.”

Then he revealed exactly when they started dating. It turns out that they were able to keep it going for at least a few weeks before we first reported on it.

“We started dating in February. We didn’t really keep it a secret that much. We were in public, went to concerts and took pictures. We were friends a year beforehand. It’s not like we hadn’t taken pictures at the gym or elsewhere before. I think people were like, ‘Maybe they’re just friends’. We started seeing each other in February and I don’t think we let the cat out of the bag until April. But weren’t taking extreme measures like she was walking around with a mustache. We did what we did and eventually she put the thing on Twitter when she was arguing with Beth and Edge.”

We’ll have to wait and see how long they stay together on television. Because WWE could be looking for their next John Cena & Nikki Bella to cash in on.

Hopefully, they stay together off-screen as well. Because things could get really awkward if their relationship gets rocky and they are still being booked as a couple on WWE television.