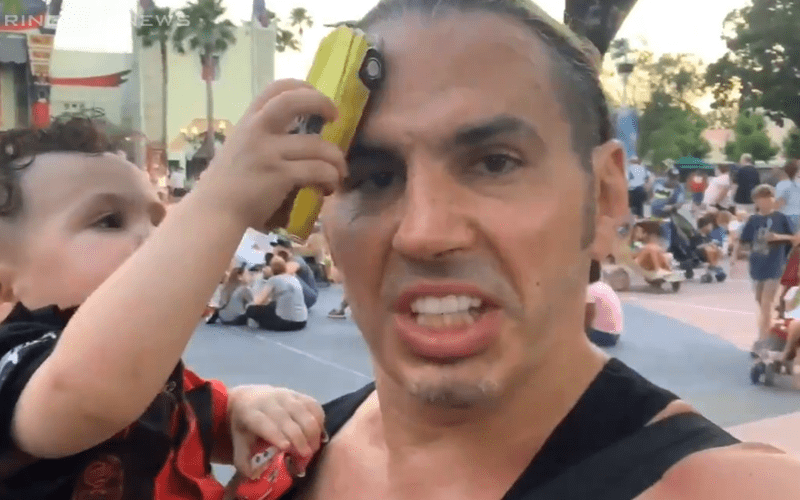 Nobody knows how hard it is to be Matt Hardy and he isn’t afraid to let people know about what is bothering him.

Reby Hardy and Matt announced yesterday that they are having a third son. This could be happy news, but a thinker like Matt Hardy is always seeing the long term ramifications.

Matt Hardy recently cut another one of his promos where he explained how hard it is to be him. However, as he spent the day in a Disney theme park not only was it difficult to get berated by fans 697 times and walked around on a bad knee, but now that he knows the gender of his next child it is even worse. Needless to say, he is plagued with this information and what is to come.

“The burden that I bear is that I just learned the gender of my third child. I am going to have three males and considering I am the man who spawned these seeds they are destined to be heart-breakers, charismatic, sexpot studs who are all alpha males.”

“How oh how am I ever going to stop these children from procreating at an early age? Oh my god. Three boys?! I am destined to pay for children for forty years. You don’t understand how hard it is to be Matt Hardy.”

The entire time Matt cut this promo at Disney’s Hollywood Studios, Wolfgang pretended his father’s face was a racetrack for his toy cars. However, Matt Hardy showed his professionalism and continued to cut the promo despite the constant distraction.

It must be hard to be Matt Hardy, especially considering the fact that he is certain that all three of his boys are going to become young fathers. Now he will be a sugar granddaddy for the entire House Hardy for the remainder of space and time. Hopefully, he’s getting paid handsomely by WWE for his services.

It is also very interesting how he threw in “trade secrets” in the list of things he was giving his 697 fans that approached him. After all, Reby Hardy and Matt had a very interesting conversation yesterday about someone who was allegedly trying to stooge Reby out for doing the same thing.