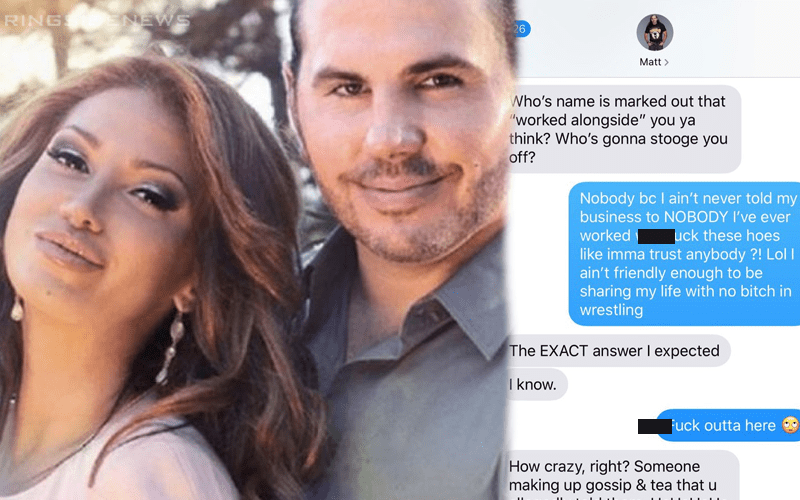 The IWC rumor mill can sometimes be a treacherous place to operate. Because there are some people out to spread lies to purposely give everyone a bad time.

Brad Shepard shared an email that he received from someone claiming to have inside sources on Reby Hardy. This person claimed to know things that Reby told people about Matt Hardy’s condition among other things.

Shepard wanted to make it clear that he was not interested in hearing any bogus stories as he included a redacted screenshot of this email along with the caption: “FYI – This is NOT information I’m interested in. Don’t waste your time by sending this type of thing to me.”

Reby Hardy saw this tweet and replied saying: “LMAO bitch you THOUGHT” along with an LOL emoji directed at the person who emailed Shepard. However things progressed after that.

Hardy then shared a screenshot of her own which included what looked to be a portion from a conversation with her husband Matt Hardy.

The conversation went as follows:

Matt: Who’s name is marked out that “worked alongside” you ya think? Who’s gonna stooge you off?

Reby: Nobody bc I ain’t never told my business to NOBODY I’ve ever worked with f*ck these hoes like imma trust anybody ?! Lol I ain’t friendly enough to be sharing my life with no bitch in wrestling

Matt: The EXACT answer I expected

Matt: How crazy, right? Someone making up gossip & tea that u allegedly told them. HaHaHaHaHaHa

Shepard wasn’t interested in hearing what this troll had to say. Unfortunately, there are some people around who get their jollies out of trying to give out bad information to reporters. Brad Shepard was simply calling out one person who made this attempt.

One thing we do know for sure is that Reby Hardy isn’t telling anybody anything because: “f*ck these hoes like imma trust anybody.”