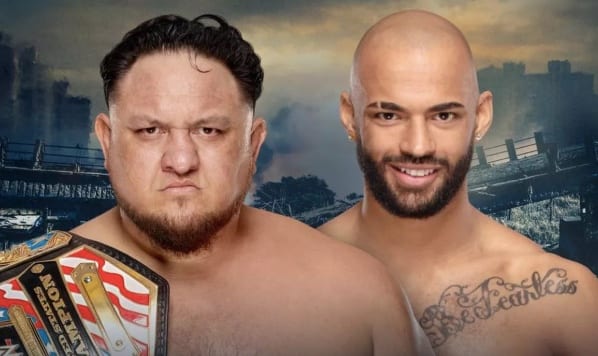 As seen on Sky Bet, the betting odds for Samoa Joe vs Ricochet at WWE Stomping Grounds have been released.

Many fans have long since been hoping that Joe can be he man to inject some new life into the United States Championship. This Sunday he’ll face what will surely be one of his toughest tests yet, as he defends the championship against the always popular Ricochet.

It’s sure to be a really fun clash of styles as the power of the champion goes up against the high flying nature of the challenger, with a belt on the line that should be in a much higher position that it is right now.

The odds have Joe as the 4/11 favourite to retain the title, whereas Ricochet is the not so distant 2/1 underdog.

The odds tell us that perhaps this isn’t as one sided as many people may have expected it to be, but either way, we get the feeling that it’s going to be incredibly entertaining. One way or another, though, we’ll almost certainly have a champion that fans can be happy with.

Ricochet has been on a really nice trajectory since making his way up to the main roster, meanwhile, Joe has been waiting for an opportunity to really make an impact in a title reign.

It has the potential to be one of the show-stealers in more ways than one, but it all depends on how much time both men are given to shin on what is a fairly deep card.