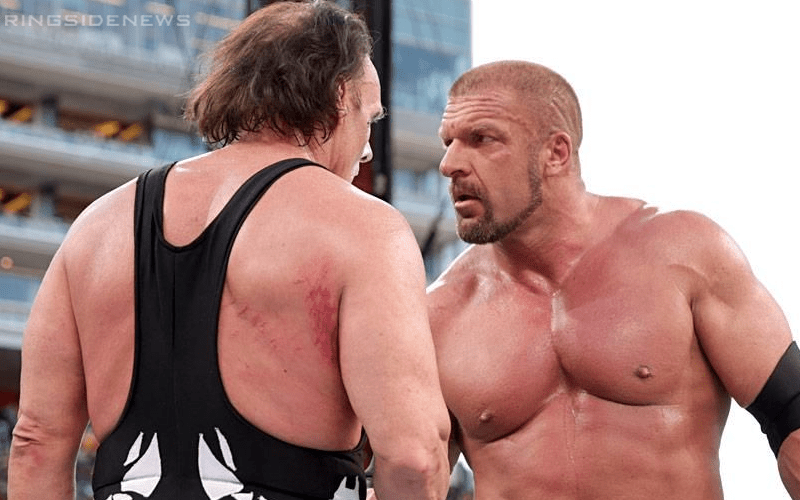 WWE books things for all sorts of reasons. One question that fans have questioned for a long time was why Triple H defeated Sting at WrestleMania 31.

Sting waited far too long before signing a WWE contract, but he lost his only WrestleMania match in clean fashion to Triple H after a schmoz with D-Generation X and members of the nWo. Some fans weren’t happy about how this went down, but Triple H claims that it was booked this way to set up a future opponent for himself.

During the WWE Untold documentary about Sting, Triple H explained that he was supposed to face The Rock at WrestleMania 32. Him defeating Sting was meant to get him over to the point where the next year at WrestleMania a program against The Great One could be prepared. However, as time told that did not happen due to The Rock’s still-exploding movie career.

“And then the next one he [Sting] threw out I think was me and so, at that point [it] was me going back to Vince and saying, ‘Do we wanna make this happen?’ And Vince was all for it and we were able to make a deal. Part of the impetus with the way things turned out with the Sting thing is because I was already booked to work with The Rock at the following year’s WrestleMania and we’ll build it for more than a year. That was the intent, belief, everything else. Just as time went on, Rock’s schedule changed later in the year and we weren’t able to do the match for the following year’s WrestleMania one-on-one against The Rock.”

“You know there are people who’ll say, ‘Well…’, I should’ve put him over to give him the moment and that’s arguably — to say that you should’ve… The Rock situation made that impossible, which didn’t happen, but that’s the truth of it. Are there things that could’ve been done differently? I don’t know that it took away from anything.”

Since Triple H didn’t face Dwayne Johnson at WrestleMania the next year that win against Sting stands alone as the only time those two will face off in the ring.

Sting has since said that the right dollar amount might convince him to wrestle one more match. After he said that fans all over started thinking about the possibilities with WWE using Saudi Arabia money. However, at this point it’s not looking likely that Sting vs Triple H will happen again.