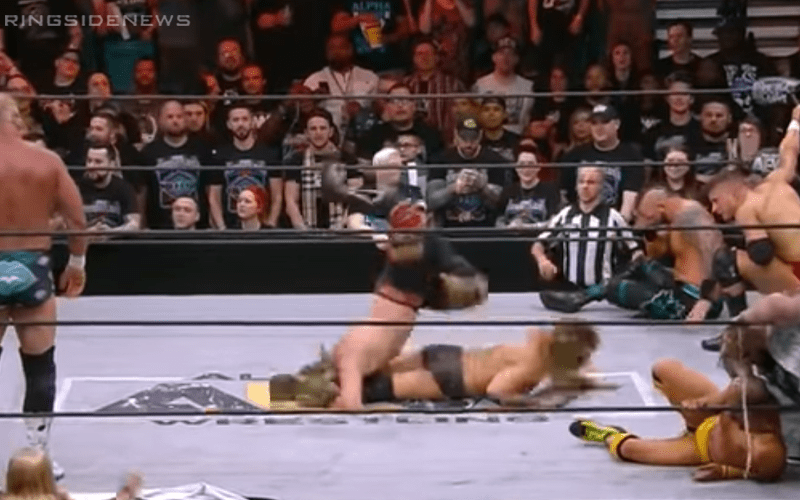 AEW Double Or Nothing included several big moments, but it all kicked off with a Big In and a Casino Battle Royale match. The winner of the match was Adam “Hangman” Page which means he is getting an All Elite World Title shot at All Out, but Jungle Boy was right there in the thick of things.

While speaking to Chris Van Vliet, Jungle Boy admitted that one of his most memorable spots during the Buy In event was actually improvised. Because Bill Gunn apparently deviated from the original plan. So Jungle Boy had to turn to Joey Janela who more than excelled.

“We kind of agreed that I was going to run first. We go out and Billy Gunn just started running and I was ‘dude, what?’ so I was actually racing him and I started running but it’s hard to run down the ramp and I really didn’t want to fall because that would have been the worst thing ever. Like the Titus thing. I was like that’s not going to be me. So I was trying to race Billy and he’s fast for an older guy, like damn.”

“So I was running trying to catch him and he slid in. I was supposed to do something with Brandon Cutler and the second Billy slid in he just started kicking Brandon Cutler. I was like ‘no way, this is not going to happen to me right now! In front of everybody like the biggest thing I’ve ever done’. So I grabbed Joey Janela and I was like ‘dude, help me’ and it was all right there. I whipped him off and it all just happened right there and I’ve wrestled him before so he kind of knows my stuff but I didn’t know he was going to do that to his head. It felt weird to me because normally somebody just takes a roll. We did it and I felt something kind of weird and it got a really, really loud reaction for a headscissors. He’s really awesome, he’s a really generous guy.”

If you need a refresher, you can check it out in the video below. It should be cued up to when Jungle Boy makes his entrance.

As you can see, he is running to catch up to Billy Gunn, but then Joey Janela more than makes up for it by spiking his own head off the mat while selling a head scissors takedown from Jungle Boy. It’s pretty crazy knowing that was all called on the spot.