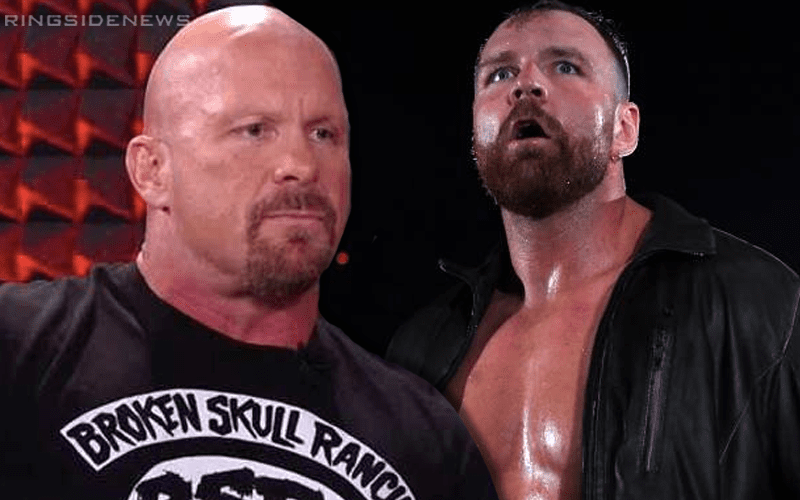 Jon Moxley has lit up a few interviews since leaving WWE. He is focused on his career after breaking out of his WWE contract now as he looks forward to his career in AEW and NJPW as well. However, he might have some unfinished business with “Stone Cold” Steve Austin.

While speaking to Tony Khan on The Steve Austin Show, the WWE Hall Of Famer brought up his podcast interview he did with Dean Ambrose on the WWE Network. That interview didn’t turn out the way he would have liked at all which is something he thinks about every day.

It might stick with Austin that he would like another crack at talking to Jon Moxley, but he was relieved to learn that Moxley doesn’t hate him for that interview.

“I’ve been carrying a thousand pounds on my back ever since [the podcast]. I felt so bad about that interview and I was leading it. I was there to get people over and make them come off like a million bucks. We came off on the wrong street, kept making left turns, and were never on track. He had his reasons and I had mine. For all this time, I felt like shit about that interview. People said, ‘the Stone Cold podcast got canceled [on WWE Network] because of that interview.’ No, I had fulfilled my commitment. Everyone thought there was heat between myself and Dean Ambrose [Jon Moxley]. I didn’t really know Dean well but I respected his talent. His fans are crapping all over me. My fans were wondering what was wrong. That interview is one thing I think about almost every single day. It still haunts me.”

“I got his number from a mutual friend and we had the best 30-minute conversation, getting back on the same page. There was never any personal animosity with us. I thought he might hate my guts. He never hated my guts. Whoever thought I was picking on Dean or whatever…I think he’s going to come down to Los Angeles and we’ll do another podcast together. This has haunted me for so damn long and when I make someone look the way they’re not supposed to look, that haunts me. I’m looking forward to talking to Jon Moxley.”

Stone Cold might not have had the best podcast with Dean Ambrose, but maybe he’ll have a better one with Jon Moxley. We can only hope that The Rattlesnake will be able to pull some info out of Mox that he hasn’t already spilled out, but if they have some Steveweisers then maybe that might jostle Moxley’s memory about some more nuggets of information.

In case you need a refresher of that interview you can check out a clip below.