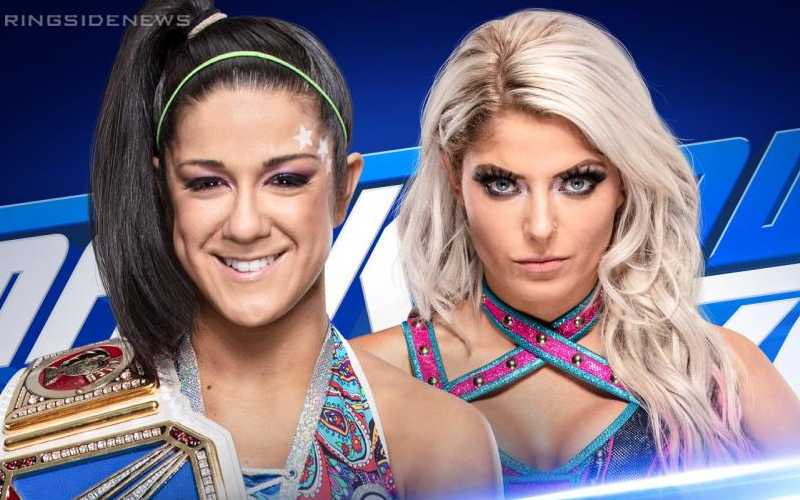 It’s time for SmackDown Live. The show will be live in Ontario, California, but you can get all of the results right here at Ringside News. So keep refreshing for the action when the show kicks off at 8:00 PM

Kofi Kingston has a big cage match against Dolph Ziggler at Stomping Grounds this Sunday. Therefore, Xavier Woods will be taking on The Show Off this week.

Alexa Bliss will host A Moment Of Bliss segment this week. She is set to face Bayley at Stomping Grounds where Bliss hopes to become the new SmackDown Women’s Champion. Therefore, Bliss will have Bayley on her talk show this week. That’ll end well.

Roman Reigns is still after Shane McMahon so we’ll just see more of that as well. With Drew McIntyre helping Shane out, Roman Reigns could have an even more difficult time, but he’ll have to deal with Drew on Sunday at Stomping Grounds.

R-Truth is still the WWE 24/7 Champion. This is very entertaining and seems to only get better. Let’s just see what they do this week.

Daniel Bryan and Rowan are SmackDown Tag Team Champions and they have Heavy Machinery breathing down their necks. Let’s see if WWE books Bryan for a match at Stomping Grounds even though that could turn into a disaster when Bryan gets cheered like crazy in Washington because Stomping Grounds is in Tacoma.

The New Day came out. Kofi threw pancakes in the crowd and welcomed everyone to SmackDown Live, baybeeee! Woods hyped his own match against Ziggler tonight and Big E started talking about his idea for the last hour of SmackDown called “the freaky hour.”

Then Ziggler came out and cut a bitter heel promo. Ziggler told Kofi that he failed before and he’ll be slamming his body against a steel cage at Stomping Grounds.

Then Kofi fired back that he’ll still be champion after Stomping Grounds, but tonight Dolph needs to worry about Xavier Woods. Dolph Ziggler told him again that he’ll be Champion at Stomping Grounds because it should have been him, but this Sunday it will be him. Good promo work from The Show Off.

These two did some mat wrestling and traded holds before the crowd started to rally for Woods. However, Ziggler slowed his momentum with a boot to the face of Woods.

Then Xavier hit an Honor Roll. Woods climbed up top, but Kevin Owens and Sami Zayn ran down to attack Big E and Kofi Kingston. The referee was throwing KO and SZ out, but Woods hit them with a dive to the outside.

When Xavier got back in, Dolph Ziggler hit him with a DDT for a two count. Then Dolph continued to punish Woods throughout the commercial break.

Woods came back with some kicks and then he nailed a spinning forearm for a two count. Then Woods sent Ziggler outside and he hit a dropkick through the ropes before moving back inside where Woods hit a press slam followed by a gutbuster for a two count.

They moved to the apron and Ziggler shoved Woods into the ring posed before hitting a Superkick that sent Xavier to the floor.

They returned to the ring and Ziggler hit a Zig Zag before wrapping Woods in the ropes and applying an armbar. Then he nailed a Superkick and covered for the win.

Shelton Benjamin and The B Team were outside Baron Corbin’s office. They want to audition to be his referee. Matt Hardy walked out of the office and called Shelton “Senor Benjamin.”

Alexa introduces Nikki Cross to everyone before calling for her coffee. Then Bayley came out and she had Bliss’ coffee.

Bliss called Bayley out for coming out with her Bayley Buddies dressed like she shops at Forever 21. Bayley said she’s doing to Nikki what Bliss did to Mickie James and Nia Jax. Bayley said Bliss isn’t a goddess, she an entitled little princess who doesn’t deserve a damn thing.

Bliss said she’s gifted and then she called Bayley a placeholder. Then she said Bayley peaked in NXT. Bayley tried to attack Bliss and then Nikki saved her only to have Alexa blindside Bayley.

Nikki looked a bit uncomfortable and then she walked away.

There was a backstage segment where Apollo Crews was looking for Andrade. She played with him for a bit before Andrade attacked him and left Crews on the flood.

Heavy Machinery didn’t give the B-Team very much room to breath at all. This was just a match to put Otis and Tucker over.

After the match was over, Seth Rollins jumped in the ring with a chair and destroyed the B-Team for being interested in referring his match on Sunday.

Shane McMahon was then met in the parking garage by Kevin Owens and Sami Zayn complaining about Rollins. Then McMahon set up KO and SZ vs Kofi and Rollins tonight.

Aleister Black cut another backstage promo to hype his eventual debut. Someone needs to find where he is and pick a fight already.